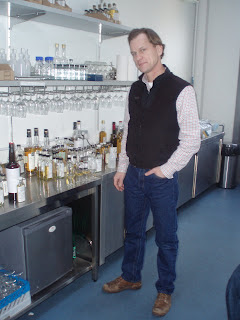 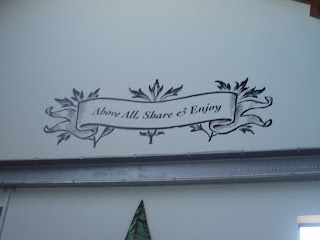 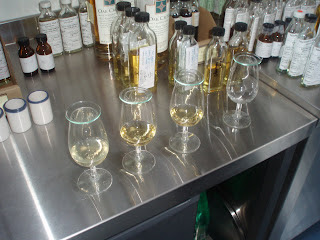 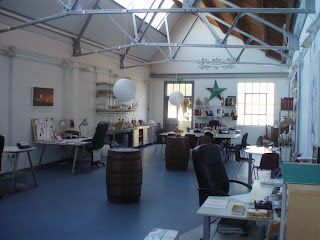 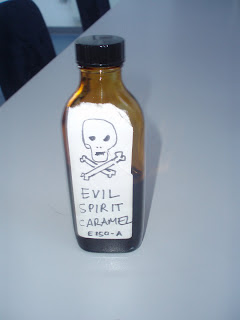 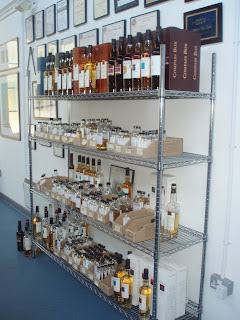 Any man who can use this analogy as an introduction to whisky is going to be A OK in my book and John Glaser is certainly A OK.

When I told people that my first trip of EAT MY GLOBE would be to an artisnal whisky maker, I am sure that their thoughts turned to the rolling moors of Speyside (does Speyside have rolling moors? Well, you get the picture) where there would, no doubt be a bit of stag hunting, a bit of salmon fishing and then home for scotch and rough hard sex with a local lassie of no fixed morals.

“Ah, Scotland” they intoned their eyes going all a misty even if they had never been further North, than Nottingham.

Well no, actually. Chiswick. That’s right, that bit of London that you have to crawl through on the way to Heathrow.

I will grant you, it is an unlikely place for a maverick (my words not his) to set up shop, but I can’t think of a better place to start than in the company of this passionate and hugely infectiously enthusiastic maker of some of the finest scotch I can ever recall tasting.

John describes himself as a “New World” scotch maker and he brings with him not only a background of nine years in the distilling industry but also years of experience in winemaking throughout the old and new worlds. These combine to challenge preconceptions about what scotch is, what it can be and who should be able to enjoy it and when.

His avowed aim is to remove it from its shroud of cut glass, before dinner mystique and open it up to a wider audience, a younger audience and an audience that does not automatically alienate 50 % of its potential by marketing itself as a drink only for men.

The best way to see what he means is, of course, to taste the stuff and I was there with knobs on, cup in hand and tongue rolling out of my mouth.

But first, there is always a but first is there? Dammit, A bit of a history lesson and the chance for John to challenge some popular misconceptions.

As history lessons go, it was one of the best. When I mentioned to people that Compass Box Whisky make boutique blended whisky, you could almost hear their lips curling in a sneer even though like me they have not clue number one what they are talking about. Like me, they probably associate blended whisky with the rubbish you can buy from the supermarkets for a tenner which can be, John tells me, about 5% malt whisky blended with 95% grain whisky.

Blends it seems, have a long and distinguished history beginning at the early part of the 19th century and “Blended Scotch Whisky” a mix of malt and grain can be a very fine thing indeed especially when, like John does, the maker uses a ratio of 40% malt whisky to 60% grain. The result in the case of Compass Box’s ASYLA whisky is a ripe rich drink which is complimented by but not over powered by whiff of vanilla from American Oak casks used in the ageing process.

The next is a “Blended Pure Malt” or a “Blended Vatted Malt” which are a mixture of single malts from a number of distilleries. In the case of “The Peat Monster”, a blend of malts from Islay where the barley is dried over peat giving that unmistakable smell of carbolic, softened with malts from two Speyside distilleries.

Finally, of course, Single malts which involve whisky from one distillery but not necessarily one year or indeed one barrel or type of barrel.

Ah, the wood. This is where the wood comes in. Who knew? Well, you probably did but I didn’t. Whisky distilleries in Scotland have been using whatever old used casks they can get their hands on for years. A result of an originally poor industry, they would take barrels from wherever they could no matter what their provenance. Barrels from France, Sherry barrels from Spain, Port barrels from Portugal and, increasingly, Bourbon barrels from the US where the law requires new oak to be used for each barrel.

The barrel both adds and subtracts from the final product. The oak, as in wine, adds flavours and the char or toast on the inside of the barrels acts as a carbon filter and filters out sulphur and other undesirables.

It’s a fascinating process and one added to by the changes in final product if the barrel has been not been used, used once or many times.

By this time, my head was spinning a bit with all the facts so John decided the best way to show me what he was on about was to let me taste not only a range of his whisky but also to see the variety of what came out of the distilleries, he and other companies use. This was a good idea (remember me? Glass in hand, tongue hanging out)

First of all, a range of four glasses which John had me sniff first and then cut with a little water before tasting. What struck me initially was that they were all incredibly pale. I assumed that this meant they were younger and had not taken any colour from the wood. Oh no. This is where evil corporate nonsense raises its head as John explained. He produced a small brown bottle on which he had lovingly drawn a scull & crossbones. Underneath his handiwork were the words “ EVIL SPIRIT CARAMEL” He opened it up and offered me a snort. Pure molasses. He explained that in 90% of commercial whisky, they use this stuff to create added colour and the illusion of age, people associating the deep dark hue with more time in the barrel as, indeed did I.

Utter piffle apparently, it all depends on what barrel is being used and how often it has been used. These four similar looking whiskies were all twelve years old. The first had come from a refill barrel that had been used over again. The second, American oak with more of those vanilla tones. The third from French Oak which had been used and the fourth from a brand new barrel.

The difference between them was, with guidance, discernable. John has the vocabulary off pat. Me? I threw around a few words like grapefruit and hoped he would not take me for a total oaf. If he did, he did not show it and I took the fact that he opened the small door at the back of his office to spit out the scotch he tasted as a sign that he did not want a shredded liver by the time he was fifty rather than my description of one of the glasses as “a bit dungy” putting him off.

Compass box has been going for six years and, in that time, it has been pushing against the boundaries of traditional whisky making in ways that sometimes bring them into conflict with the powers that be. John’s use of new oak staves in old barrels to create more depth being a case in point. It’s not traditional, so it’s just not done.

Let none of this imply however that Compass Box Whiskies are different for the sake of it. These are offerings that follow in the path of truly great blenders of ages past but developing scotch to open up this most miraculous of drinks to a wider audience.

John drinks whisky throughout a meal. 50/50 with water before hand and a little more neat as the evening progresses. Having tried it, I can see how that would work. Not just with the obvious choices like chocolate or cheese but with stews or even grilled fish.

Jim Murray, who is to whisky what Robert Parker is to wine, describes Compass Box Whisky as “So sexy you could almost make love to it” and the passion John Glaser and his chums put into every dram of their product comes through in each and every mouthful.

As I arrange the EAT MY GLOBE trip, what is coming through loud and clear is that what I am searching for is the chance to match my passion to "go everywhere and eat everything” with the passion people have for producing the food and drink they love.

If that is the case, I can have made no better choice for my first stop that Compass Box Whisky and John Glaser.

Go to your local bar and try some. If they don’t have it, demand that they buy some. It's that good.
Posted by Hermano 2 at 7:13 AM