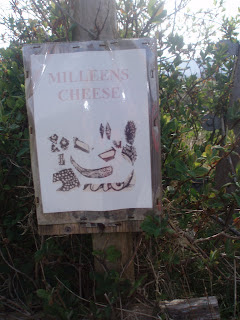 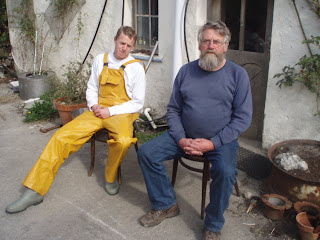 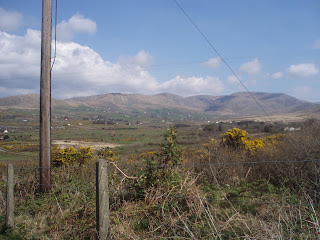 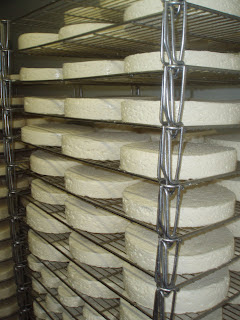 MILLEENS: MEN ( AND WOMEN) OF STEELE

Everyone, but everyone I spoke to about visiting cheese makers on this trip said “ oh you must call it ‘blessed are the cheese makers’ “ and, of course, they all thought they were the only ones to have thought about it. Bless them.

When I was making my initial EAT MY GLOBE list, I was, of course, going to have some cheese makers on there. But who? Montgomery’s Cheddar was a frontrunner, as was Mrs Kirkham’s Lancashire and Gorwydd Caerphilly. But, my final choice was made during a visit to that cathedral to all that is good about cheeses from the British Isles, Neal’s Yard Dairy. When one of the young staff plied me with tastes of Cashel Blue and I ended up buying a big wedge of tangy, creamy, blue goodness. Alongside it, wrapped in its cellophane covering was a small round of wash rind Milleens. A lovely cheese, the assistant reminded me and, as they also pointed out, from the same part of the world.

So, that was me decided.

As seems to be ever the way on EAT MY GLOBE, when I got in touch with the people at Milleens and Cashel Blue, they could not have been more welcoming. Not only did they appreciate the idea of my trip, but welcomed the opportunity to talk about the thing they hold so dear.

It’s a long old drive from Cork Airport to Castletownbeer, the nearest town of any size to Milleens and most of it is spent behind tractors that, if they were going any more slowly, would be going backwards. It is, however, made bearable by the scenery. You know it is going to be pretty. You know that it is the stuff of picture postcards, but, the Beara peninsula in West Cork has to rank amongst the most astonishing countryside in The British Isles. Traipsing along at under twenty miles an hour for big chunks of a journey would usually have me on the edge of a stroke. Not here as I chilled out, listened to a bit of folky gaelic nonsense on the radio and took my time.

I was there soon enough and settled into my B&B before going out to hit the nightlife of Castletownbeer. Well, it was late afternoon by then, so the nightlife had finished for the day, obviously, so, after a dreadful early supper and a couple of pints of the black stuff, I slunk back to my room and got an early night.

Up bright and early the next morning, shaved and ready for some cheese, I drove the five miles to Eyries, the small hamlet which houses Milleens Farm.

When I puttered up the path to the rambling farmhouse, Quinlan was in the tiny cheese making unit turning the small wheels he had made a few days before. So, Norman, dragged a couple of rickety kitchen chairs out into the sunshine of farmyard and gave me a history lesson.

There are, I am told, sixty five farmhouse cheese makers in Ireland. Milleens was the first.

Originally, Norman was a professor of Philosophy at Trinity College and split his time between Dublin and the farm which he and his wife bought in the late seventies.

They started making their wash rind cheese for the same reason many cheese makers begin, to use up excess milk. In their case, from their solitary and wonderfully named cow, Brisket.

In true “you couldn’t make it up” fashion, they gave some to a friend, who ran a restaurant and she happened to serve some to one Declan Ryan, at the time, the owner of the only Michelin starred restaurant in Ireland, Arbetus in Cork. He demanded to know what it was and who made it and the next thing you know, it was the wash rind of choice for any self respecting cheeseboard where it remains to this day.

Well, of course it was not quite that easy. Both good luck and bad luck helped along the way. Good luck came in the rotund form of Jane Grigson who ambled up their path one day because she had heard about this wonderful cheese. Bad luck came in the “angel of death” form of BSE which destroyed their entire herd and so devastated them that they have never replaced it preferring to buy in their milk from neighbouring farmers. As Norman puts it “I just didn’t have the heart anymore”

By the turn of the millennium, thirty years of hard graft had begun to take their toll and there was a real chance that they would begin to go backward rather than forward. Enter Quinlan Steele. Not, as the name suggests, the hero in a mass market paperback espionage thriller, but the only son of the Steele offspring who stepped in when family matters meant that Veronica was not able to dedicate time to making the cheese she had lovingly developed.

At 26 and a graduate in IT, Quinlan is an unlikely hero for Milleens, but, hero he is. Taking over the cheese making while Norman crunches the numbers.

With the unending energy of youth and an aptitude for technology that allows him to plough through the internet in search of the latest papers on micro biology, you get the impression that Quinlan is set to take what is already a great cheese, to new levels.

Not that he tinkers with Milleens for the sake of it though. Jane Grigson told Norman Steele that she loved his cheese because it “was always different but always recognisably Milleens” and this artisanal approach is something that all concerned have taken to heart.

He may only have been in charge for four years but he has been around Milleens since he was small and his love of it is tangible with him freely admitting that he probably eats a small wheel a day.

After The Professor had given me the theory, The Student gave me the tour. In truth, not much to see, a small vat, some racks, a temperature controlled room and a place to wrap them and that’s it.

It is a small operation making a little under ten tonnes a year. To put that into context, Cashel Blue produce two hundred and seventy tonnes a year and some of the larger English farmhouse cheeses double that.

But, bear in mind that everything concerning Milleens cheese is done by hand. The filling of the vats and the mixing with starter and rennet. The straining of curds from the whey, the moulding and draining, the turning and, finally, the packing in cellophane and the labelling. Everything.

After the tour, Quinlan selected a likely specimen and we took it back into the farm kitchen where the three of us chomped on it over a cup of tea.

It was a young version of the cheese I love as the more mature cheeses are out of the door the moment they are ready. But, it still had all of the characteristics I love about Milleen. This is not a cheese for the weak hearted. Not a one schtick pony like Stinking Bishop, but a cheese with depth, character and an unmistakeable flavour even here in its youthful form. It ripens from the rind through the paste until, at its peak it is a strong cheese with immense depth.

The avuncular Norman filled the time with more stories. The time Floyd came to film in their kitchen, the time a Dept of Agriculture official told them he would have to get rid of his beard, the time he thinks ripening cheeses in a caused a postal walkout over working conditions. An endless flow and I wish that my time with them could have been the same. But, Quinlan had cheese to make and Norman had milk to collect.

Quinlan wrapped a selected cheese in some greaseproof paper as a parting gift and I stuck it in the bottom of my bag hoping that it would not cause a walk out by Aer Lingus staff over working conditions.

Now, I am back home and waiting for it to come to temperature before biting into a large hunk. When I do, I shall think of Norman and his beard and of Quinlan, the quiet, serious cheese maker who is making sure Milleens is still on fine cheese boards everywhere and will continue to be so for years to come.
Posted by Hermano 2 at 12:17 PM