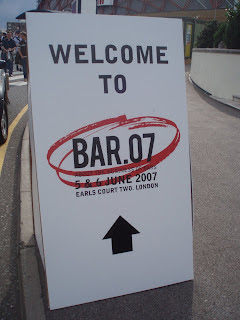 BAR ROOM BUDDIES: THE LONDON BAR SHOW
The first sight I got at The London Bar Show was of two women, in bikinis, sprayed in silver, gyrating, in a suspended cage. The London Book Fair, it aint.

All a bit of a shock to the system. Book fairs are huge affairs and the only noise is the constant hubbub of deals being done. Here, well here it is an assault to every sense imaginable. There are stands, of course, enormous stands for some of the biggest companies and brands and a few people really did seem to be talking business. But, for the most part, it seemed like one big hug fest as people in this relatively small community greeted each other like long lost friends even though they had only seen each other the night before.

And, it the night before which is what London Bar Show seems to be all about. Apart from the poor suckers who have to man the stands, precious few people get to the fair before 10.30am as they are still recovering from whatever part of London Bar Week has challenged their liver the previous evening.

My precursor to the first day of the fair was an event at Milk & Honey hosted by The Worldwide Cocktail Club ( I think ) where, on each floor, legendary cocktail makers like Gary Regan

and Ted Haigh ( the self styled Dr Cocktail ) treated us to cocktails from times past like Scotch Alexanders, True Cosmopolitans ( made with raspberries) and enough others for me to clear forget all my woes for a while.

The people in this business are extraordinary and welcomed me in not only to these events but to their whole world as if I have been part of the scene for years. I came out of Milk & Honey with about 80 cards in my pocket all with invitations to visit the giver on my trip. Gin and Bourbon Distillers, Curators of museums, owners of bars, everyone you can think of. Great fun

Well, great fun at the time. It made yesterday morning very interesting indeed as I stood at the bottom end of Brick Lane and waited for Nick Strangeway to whiz by in a cab and collect me on the way to the show. He of course, was right as rain or, if he wasn’t he was too much of an old pro to show it.

First stop was the Bar Tenders Stand where Nick was to be one of three barmen mixing versions of Bloody Mary’s for an appreciative crowd of industry folk.

Nick, naturally, does not do things in a straightforward fashion. His Bloody Mary was, in fact, a Bloody Bullshot and involved beef stock as well as tomato juice all mixed together in the biggest shaker in Christendom 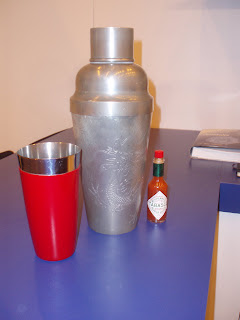 which he had recently bought on E-Bay. I never got to try it as all the samples were snaffled up by the audience. So, by way of compensation Nick whizzed up a “bartender’s breakfast” a shot of beef stock with lime juice and tequila. Just what the Dr ordered for 11am in the morning.

The rest of the day was spent shadowing Nick which was great fun apart from the fact that it takes him half an hour to walk 50 yards in the hall as so many people know him.

By 12.30pm, he was ready to take his place as a judge in The Bartender of The Year competition and I leant in behind as he wrote notes against each of the competitors names as they whisked up their own recipes and then had to create one from the ingredients in a surprise goodie bag. 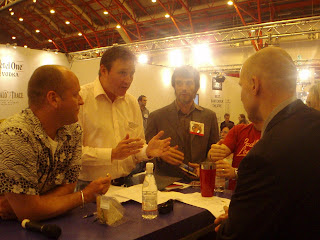 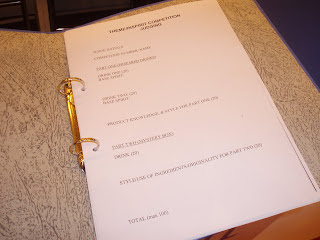 Five hours later, Nick was still there as the last competitor whizzed, whirled and shook. Me? After making sure I watched Tobias, from PinXo People in Brighton do his stuff, 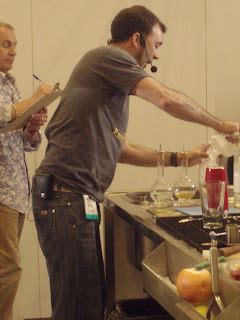 I slunk off to The Beefeater Gin VIP area where my new chum, Sue Leckie had given me a pass. Fantastic. They had hired an old routemaster bus which had been pimped up to include a large Jacuzzi and DJ decks and they were pumping out “ The Best of The Clash” ( London Calling, see with Beefeater being the only one still distilled in, well, you get the picture) 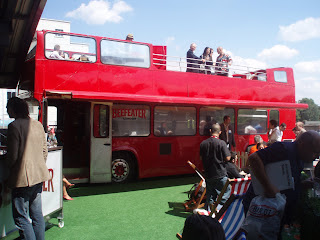 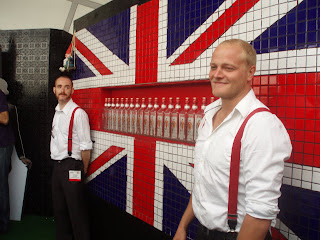 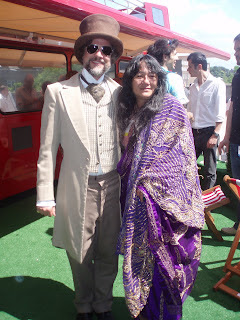 and pouring large G&T’s and Elderflower Breezes for the good and the great and, er me. As I said to one of my neighbouring drinkers, The Travelling Mixologists from Germany, every so often and just for a short while, life stops kicking you in the ass. This was one of those all too rare moments.

By 5pm, the show was winding down and I was ready to head off for a quiet supper with a friend. The rest of them were just getting warmed up for the Theme Bar Awards Dinner and were all set for another late night/early morning.

I love this crowd, but, I think if I spent another week with them, I would be dead by Friday.
Posted by Hermano 2 at 1:50 AM

I'm in the wrong profession. Book Expo was never like this.