GETTING BIGGER IN JAPAN 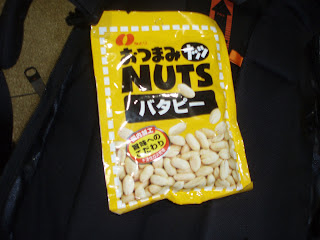 In 1978, I bought an album called PS 78 by a now legendary but long defunct, Dutch band called Gruppo Sportivo. On it was a track called Tokyo which contained the verse above.

It was not, of course, the first time this fourteen year old boy had heard of Tokyo, but it was probably the first time I thought about it as somewhere other than a destination for Hawkeye and Trapper to go for a wangled 48 hour furlough.

I suddenly thought it may be a cool place, a view further re-enforced by further additions to my nascent record collection. Cheap Trick were “Live at The Budokan” and the impossibly ugly Scorpions were being “Live and Dagerous” in front of a crowd of scared looking Japanese schoolgirls.

It was, for once, nothing to do with food and everything to do with a hormonally challenged teenager wanting to develop his own (however horrific) musical tastes that owed nothing to his brothers hand me downs of unfeasibly horrible prog’ rock.

I wanted to go to Tokyo. I just didn’t realise that it was going to take me another 30 years to fulfil that ambition. Thirty years in which, Cheap Trick and The Scorpions had been consigned to the bargain bin of my life and even P.S 78 laid untouched for the best part of twenty years.

By the time I decided to EAT MY GLOBE, there was little chance that Tokyo and Japan would not be on the itinerary. By now, I had developed a real yen ( sorry!) for Japanese food, through my own stuttering attempts and also with the help of more expert friends in London and NYC who helped me distinguish my Yakitori from my Unagi.

I decided that Japan would make the ideal starting point for a journey that would also take in Hong Kong, China, Mongolia and Russia and I also decided that, for once, rather than travel independently, I would join a group. Not a large group mind, I had no great desire to walk behind someone waving an umbrella in a re-enactment of “If It’s Tuesday, It Must Be Belgium” (whatever unsavoury thoughts I may have about Tuesday Weld in said film) but I did think that in a country where the language would be as unfamiliar to me as a warm welcome home from a loving partner, it would be better to er on the side of caution.

A company called Intrepid seemed to fit the bill. Decent itineraries, groups no bigger that twelve people and just expensive enough that people on gap years would avoid it like soap on a Sunday.

I had to organise my own flights, though and decided that it would be worth getting into Tokyo a few days earlier than everyone else so I could go and explore. That was, as it turned out, a very good idea. What was not such a good idea was choosing Lufthansa for my mode of transport. 14 hours of sheer purgatory involving a flight to Munich, a delay in that drab little airport with little to recommend it other than a rather fun porn shop ( where I was tempted to buy something called a “Large Ass Stuffer” just to see if I could get it through security) and turbulence that lasted from Kiev to Japanese air space which resulted in the whole plane taking on a vague odour of vomit from the resulting bouts of air sickness.

Me, well I have a reasonably strong stomach, but even I could not face the little plate of slightly greying airline sushi the determined young attendants brought round.

By the time I landed, I was feeling sorry for myself and slightly apprehensive about the journey from Narita to my hotel in Ueno. The description on the tour notes made it seem more likely that I would find Atlantis than my hotel, but, they turned out to be dead on the money ( they must do this for a living ) and about an hour after landing I found myself checking into the basic but clean and comfortable Kunaya Hotel. 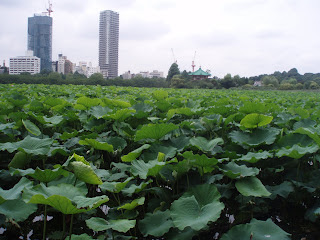 Or, at least I would have done, had I not encountered the first of instances that displayed how we are a world separated by cultural differences.

“ Is my room ready?” I asked the young woman behind the counter.

She smiled “ Check in time is 1 o’clock”

So, I had to sit down by the side of reception until exactly check in time, all of five minutes later until she gave me my key with a big smile.

Still, a minor inconvenience and, half an hour later, I was showered and shaved and ready to go out and explore.

When I say “explore” I, of course, mean wander the neighbourhood a few blocks around my hotel until I got my bearings. But, that turned out to be no bad thing as the ward of Ueno turned out not only to be home to some of the best loved parks, temples and shrines in Tokyo but also to some of the best food I had in my few days there.

Just after the end of the war and at the beginning of the occupation period, Ueno was home to the biggest of the black markets selling people who had been subject to severe rationing things that some of them had only read about in books. That did not last long as the occupying forces closed the markets down, but the area still survives and, just behind the JR station and under the tracks (as seems to be the case all around Tokyo) remains a labyrinth of alleyways and passages that house market stalls selling fish, fruits and vegetables alongside any number of small restaurants including some enticing looking Yakitori places where tables were pieces of wood on top of beer crates and chairs were more of the crates along side a mis-matched assortment of old school chairs.

My stomach had not quite settled down yet, so I decided to go easy for my first meal in Japan and find the comfort in some good frying.

Now, my Japanese is, to say the least a bit rusty. In fact, non-existent. I don’t know my “Konichiwa” from my “Domo Arigato” but that does not seem to be much of a problem in Tokyo. The majority of restaurants seem to have picture menus and, even better large displays of the dishes on offer inside lovingly crafted out of moulded plastic. This is, I was told by our guide later on, a legacy of the arrival of western style dishes to Japan which needed to be explained which, they felt was best done by way of models made of wax which then, for matters of ease and cost became plastic. 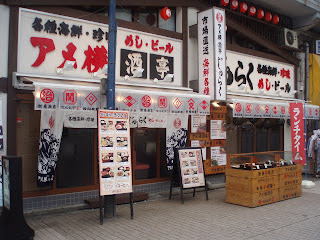 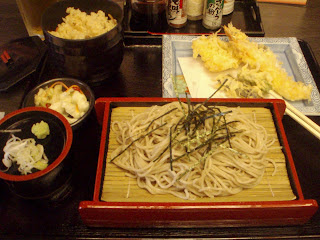 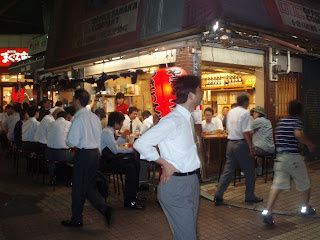 For a Japan rube like me it does make things very easy. A quick point at a picture on a menu or a model of something noodly and uttering the word “Birru” soon had me sitting in front of a plate of excellent tempura, some cold soba noodles and a bowl of rice. Cheap and filling, it was exactly what I needed before the jet lag hit and I had to wobble back to the hotel and crash out until the early evening.

By then, I was recovered enough from the flight to be a bit more adventurous. Still, keeping to the local neighbourhood, I set off in search of Yakitori.

I am told, it literally translates as “fowl on sticks” but I am sure some expert out there will correct me. In effect, Yakitori is a range of items on skewers that are grilled to order and either sprinkled with salt or dipped in sauce and served with a cold draft beer or soschu (a rather fierce little spirit that a lot of locals mix with appallingly sweet juices to take away the raw taste)

They seem primarily to be the haunt of salarymen on their way home from a hard day at the office and, as I chose one at random, I had to squeeze my ample frame in between two men deep in conversation on their mobile phones before gesturing for a beer. 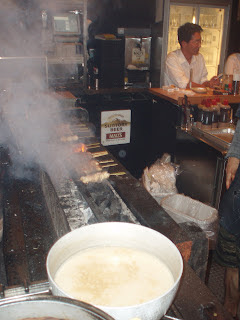 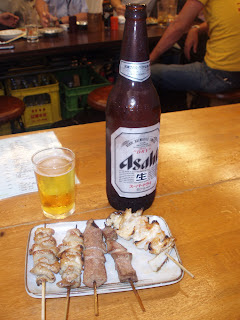 A rather frighteningly sized bottle of Sapporo appeared and, after my journey, I was about ready to dive face deep and wash myself all over in its hoppy goodness. But, just as I reached out for it, the man on my left reached over and took hold of my bottle. Now, I don’t know about you, but where I was brought up, in Yorkshire, touching someone else’s beer is worse that goosing their wife. It will inevitably lead to a fight and there may well be broken glass in.

Fortunately, a lot of research about Japanese culture enabled me to contain my inner Yorkshireman and understand that in this country of etiquette and superstitions, pouring your own beer is a no no. At best, it just means you are Billy no mates. At worst, it is a harbinger of ill fortune.

Well, anyone who has seen what I look like will realise that I have had all the bad luck I can handle so I was not desperately well disposed to bring down even more misfortune, so I allowed my new friend, Koji to pour my beer and we began a very faltering conversation. 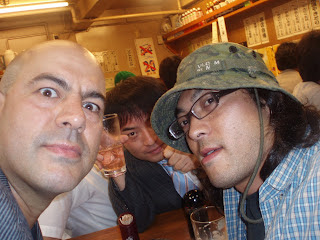 My skewers appeared, so did his. The inevitable swapping followed so I sampled crispy Chicken skin, Chicken hearts & livers, beef tendon, roasted garlic, leeks and a whole load more all while I got to know my new friend over half a dozen oil tanker sized bottles of beer.

Hello Simon. My name is Yuko. I'm your friend Koji's girl. He came home very happy the day he had drinks with you in Ueno.
He says that he will study English so that next time you come he can show you around. He also told me about your new book coming out. We look forward to that. Take care.