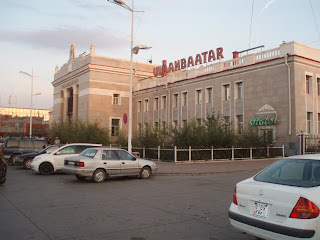 The history of Mongolia and its capital Ulan Batar, is one of subjugation and tyranny.

Since the time of Ghengis Khan (pronounced Chingis Hahn – btw) and the decline of the Mongol empire, this small country has been under the control of other nations. First the Chinese and latterly the Soviet Union. 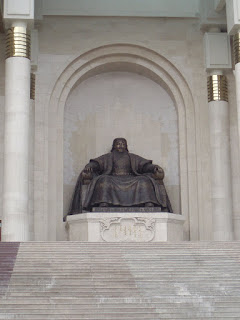 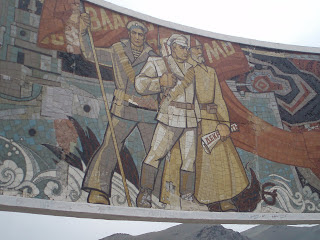 As I have said in previous posts, I am not a historian, so if you want a lesson, go and use Google. However, the past history and , in particular, the recent past history, has had an enormous impact on what this country and UB itself is.

For nearly seventy years, Ulan Batar was a soviet outpost with all that entails, the economy was strictly Soviet socialism, religion observance was outlawed and all places of worship including century old monasteries, were destroyed or turned into municipal buildings. 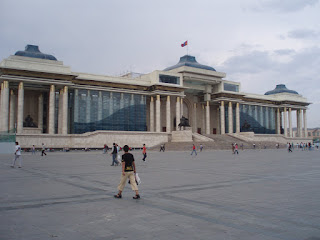 In the early 90’s when The Soviet Union shattered into nations states, Mongolia was cut loose and left to fend for itself. With no recognisable source of income and no export market to the USSR, it quickly descended into poverty and would have descended into chaos but for one factor. The incredible resilience of the Mongolian people.

I can say, hand on heart, that I have yet to meet anyone quite like them brave, passionate, intensely proud of their country, intensely close to their families and inordinately hospitable.

Despite the fact that at least 60+% of the three million population of Mongolia lives the classic nomadic lifestyle, Ulan Batar (recently just topping the one million mark) sums up the state of the nation perfectly.

With no state funds to support infrastructure, the city’s pavements are crumbling and road surfaces almost non existent. Medical services are negligible and there is a great deal of poverty.

It is one of the ugliest cities I have ever seen and I understand why guide books describe it as a carbuncle on the face of the earth. The majority of the architecture is a legacy of its Soviet days and there are high levels of pollution.

In a remarkable contradiction to this tale of gloom, there is also an upside. Mongolia has a very stable education system and levels of literacy are high with a great many of the population speaking exceptional English (mainly because, without it, they have no chance of progressing in the world) The country has some of the most advanced communications networks in Asia and, because of foreign investment in the mining of Mongolia’s rich deposits of minerals, it has large ex pat communities from all over the world which, inevitably means equally large numbers of restaurants, cafes and bars to serve them.

By far the largest group are Germans and, whither go Germans, so go beer which also means that UB is stuffed to the rafters with pubs and bars primarily selling the local beer, Chingis, which comes in various forms all derived from German brewing techniques. In fact, the bar at The Chingis Brewery is a fully decked out German Beerkeller with all the Mongolian waitresses dressed in German gear which was slightly disconcerting for them and for me. 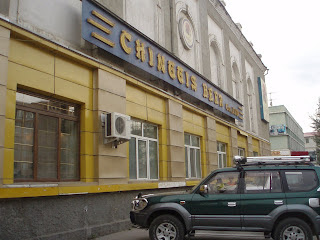 Food in UB is hardly of the delicate kind. It has more in common with that of its former Soviet overlords with smoked fish abounding along with stuffed pancakes called Kushur and I am not going to claim that meals there will be the memories that live the longest in my mind. 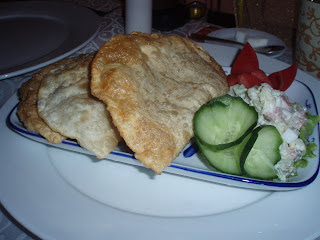 That being said, it is, with the exception of France, the only place that I have eaten horse. 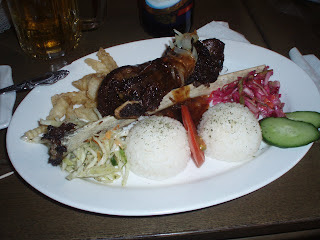 For our first meal there, I ordered a horse rib. When it came it reminded me of the opening credits of The Flintstones when Fred gets a Bronto burger at the Drive-in and, when placed on the car, it tips it over because of its size. This was about the same size and I tucked into it with about the same gusto as Mr Flinstone. Quite gamey and a little bit stringy but not bad at all. 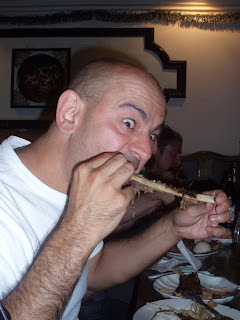 We only spent the one night in UB before heading out for the next part of the adventure. A trip which proved to be one of, if not the, highlight of the journey so far.

We set off pretty early in the morning to head out to the Mongolian countryside where we would be spending the next couple of days on a Ger camp sleeping in the tents that are the normal accommodation for the majority of Mongolia’s population.

Our guide, Nemo, had formerly been a urologist but, had not been paid in a number of years by the government who simply had no money and now was supplementing his income by showing groups like our own around his country.


His passion for his homeland was tangible and he took time to make a number of stops as we drove to the camp to show us things that we otherwise would have missed. A small pyre of stones, topped with flags around which you walk three times to make a blessing. Two men at the roadside with their eagles and, best of all, the encampment of a nomadic family with whom he was acquainted. 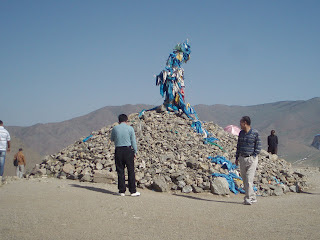 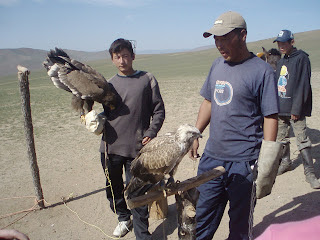 They gave us the opportunity to spend some time in their tent and to taste some of the food they made, primarily from horse milk.

Whenever I tell people that I went to Mongolia, they all say “did you taste the fermented yak’s milk?” This is one of those fallacies that seems to have become accepted by everyone (including me before I actually went there) but has no basis in truth.

The Mongolians certainly keep yaks, but only for their wool. They produce very little milk. Arag, the fermented drink so associated with the region, in fact comes from Horses’ milk. 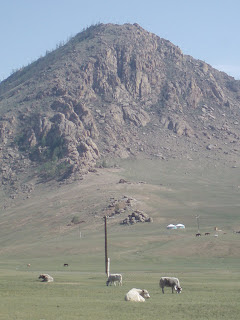 Nemo showed us how it is produced, in a bag made from a cow’s stomach which holds nearly eighty litres of the stuff. About 10% is kept each time as a “master” and it is refilled each day with fresh milk which is then stirred vigorously with a paddle every time someone passes the bag. It reaches a strength of about 3% and remarkably, Nemo told us, Mongolians can drink easily drink as much as five litres a day. 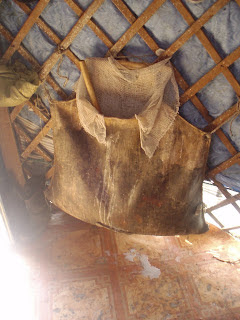 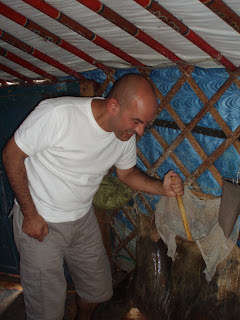 We got to try some and I would love to say that I liked it. I really would, but I can’t. It was really a dreadful think which I would describe as being like white, musty smelling, horse piss.

The other products made from horse milk were equally challenging. A curd biscuit, a “vodka” distilled from a yoghurt and a hard cheese. 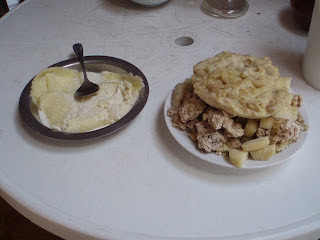 The only thing I did quite like was a cream with a skin that was similar to Clotted cream and made in much the same way by heating milk up in a pot over water.

After we left the camp, Nemo made another stop and suddenly and unexpectedly produced a set of golf clubs which led to the unexpected sight of a small group of westerners hitting a few golf balls in no particular direction across the Mongolian plains. 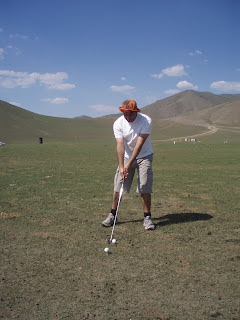 By now, we were almost at the camp and, when we arrived, I have to admit that it took my breath away. It was a small encampment, with about twenty ger tents which are often used by Mongolians from UB when they want to get away from the chaos of the city and return to a more idyllic existence. It certainly is idyllic and, after we settled in to our camp, I took the opportunity to go for a stroll. 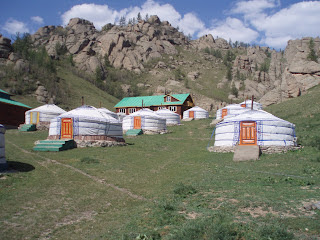 The beauty of the surrounding countryside comes as a shock after the grime and decrepitude of UB. It is lush and green and incredibly peaceful. After China, it was a much needed slow down in pace. 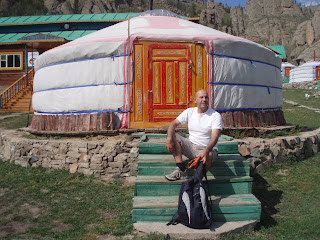 The next twenty four hours passed very happily. People went riding. Not me mind you, I eat horses, I don’t ride them. People tried their hand at archery and people went for long hikes. It was good to be in out and about in the clean air and to have the opportunity to see the Mongolians doing things that have been part of their culture for centuries. Particularly riding.

They have a saying that “Mongolians are born in the saddle and die in the saddle” and it is true, they are incredibly at ease on horseback. The next morning, I awoke about 6am and headed out for a bit of a stroll. As I pottered around the camp, I saw two men on horseback out herding their cattle. They were going at full gallop, both standing up in the stirrups with their hands on their hips as if it was the most natural thing in the word and, to them, I guess it was. 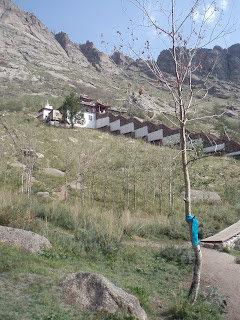 When it came time to leave the camp, we all felt a little deflated. It was such a beautiful place to be and the quiet and calm so welcome that we were all loathe to lead it. However, we were heading back for one more night in UB before the beginning of the next stage of the journey.

The beginning of the Trans Mongolian/Trans Siberian Express which, after all, is what the trip was all about.
Posted by Hermano 2 at 5:46 PM