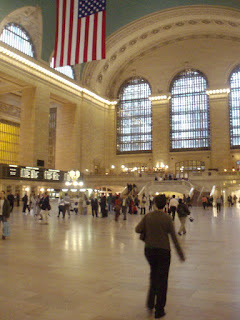 There is no more beautiful sight in the whole of NYC than the inside of the recently restored Grand Central Station and there is no better a person to meet there than my good chum, Sandra Levine.

Inevitably, I met Sandra or Sandy through food websites, but alongside her passion for food, which is considerable as I can testify after tasting a number of excellent meals, is a dedication to capturing and recording some of the architectural highlights and heritage of this city.

When I was planning the NYC part of my trip, I made it quite clear to Sandy that she was down in my book to play guide as I headed off to explore a neighbourhood that had caught my imagination when watching movies and documentaries about NY’s vibrant Italian community, Arthur Avenue. She, for whatever reason, seemed to think that accompanying me for a day’s mooching around NY could be an agreeable way to pass the day.

Situated in the Bronx, a short train ride from Manhattan (hence the meeting point) Arthur Avenue seems to still retain its title as the de facto capital of Italian New York City particularly in the face of its Manhattan equivalent being devoured by an encroaching Chinatown. It is facing its own challenges however, as Sandy, who has forgotten more about NY than anyone else I have met has ever known, explained. The latest influx into the area is a large Albanian community who have begun to take over the businesses of the area including the restaurants which they still run as “Italian” even though a pale imitation of their former selves.

Still, Sandy thought it was still worth a trip and that was good enough for me to brave the train and find the street easily with some helpful and accurate signage 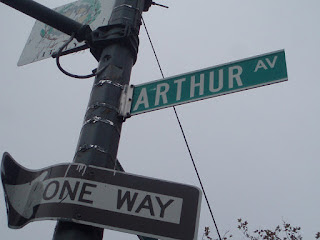 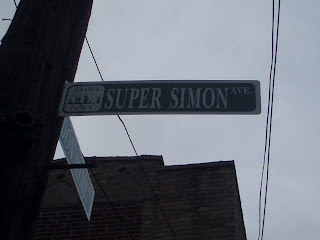 It is, from what I can tell, definitely a fixture on the tourist trail, with people using it as a feeding point when visiting The Bronx Zoo or the nearby Botanical Gardens. However, on a quiet Thursday mid morning, we were able to spend a good few hours wandering around with precious few other people around to crowd us as we went from store to store gawking everywhere and sampling where we could.

The names alone are enough to conjour up a time when this neighbourhood was screaming with new immigrants from Italy. Not yet ready to assimilate and still craving tastes and ingredients from home. De Lilo’s pastries, 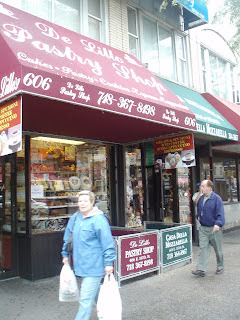 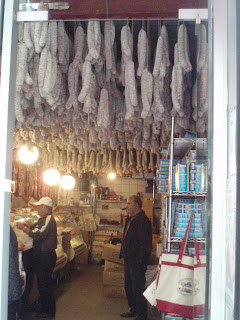 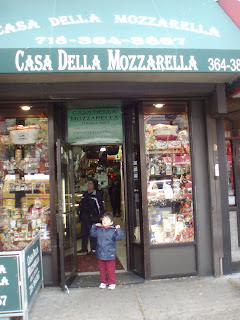 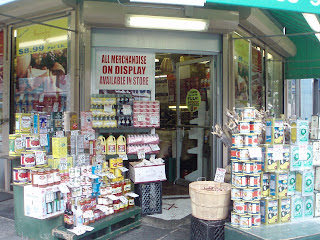 The Calandra Cheese store and the Indoor Market. 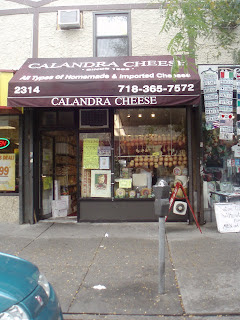 Sandy is nothing if not thorough so had prepared a list of places that not only she, but others, had said should be on any self respecting tour of Arthur Avenue. We tasted canoli at De Lilo’s (in truth not that great) 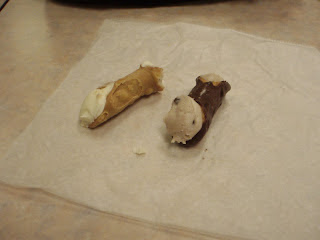 and clams at Umberto’s. 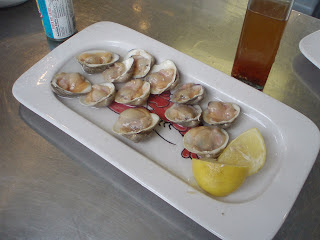 In fact, We sucked down clams at two stalls and we stared hungrily at the enormo sandwiches at the Indoor Market. 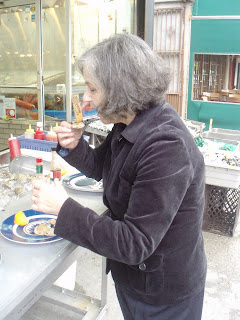 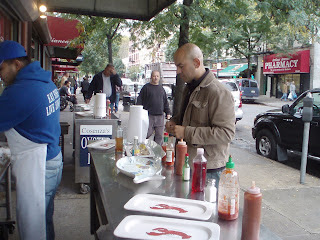 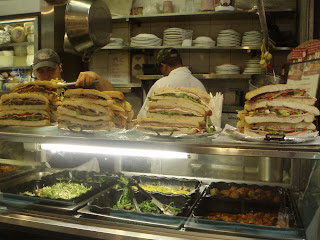 It would have pretty easy to have made a meal by snacking our way along the street, but I wanted to sit down and have lunch at one of the famous restaurants on the Avenue itself. I think Sandy was slightly bemused by this. She warned me that the quality could be variable and that the pricing was made up on the spot depending on how smart you looked or how expensive your shoes were.

I understood and was fully prepared for it not to be a great meal, but, as I explained to Sandy, this style of “red sauce” Italian cooking, something which is truly an American creation, was as alien to me as eating horse in Mongolia or Elk in Finland and as such, it had every bit as much right to be sampled even if it turned out to be pretty awful. 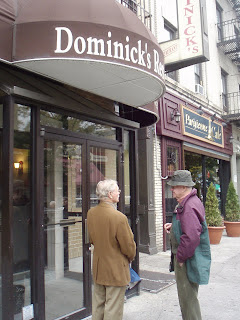 Well, for the record, the food at our chosen place, Dominick’s was pretty bleh. A heavy pasta dish in a shrimp sauce, 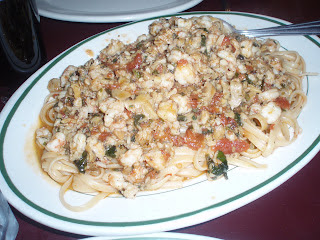 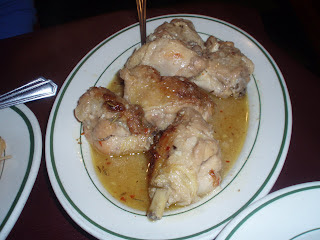 and chicken Scarpiello which was nice and stewed all served with a glass of “context” wine. That is wine that is just about fine in context but which you would not use on your chips under any other circumstance. Yes, we were overcharged too. The bill came to $40 which I am told was because of my accent. I am used to my British charm getting me into trouble, but rarely has it been the cause of a price hike in a restaurant.

Despite all of this, I loved Dominick’s. With the hustle and bustle that only American Italians seem capable of and noise enough from a lunchtime crowd to compete with a jet engine, it was enormous fun. Everybody in there seemed to be having a great time including our table companions who were extolling the virtues of the food more based on memories of childhood than any inherent quality of what was placed in front of them or us. 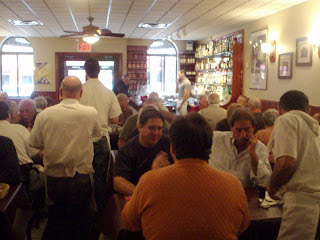 Would I ever go back there? Of course not, but I am so glad I did. You will have to ask Sandy what she thinks……………

It was still only early afternoon and had time to kill before my evening plans. Sandy kindly agreed to give me more of a guided tour, this time around some of Manhattan’s Lower East Side. She really knows her stuff and we walked for about an hour as she showed me buildings of note and worth including Kossar’s which is famous for making Bialys.

Now, I have to be honest and say that, while I had heard of these things, I had never actually tried one. Similar to a bagel, but simply baked instead of being boiled first, they have their origin in Polish Askenazi cooking and seem to be something that is distinctly a New York thing.

Another distinctly New York thing is having an opinion on everything and everything and I laughed out loud when Sandy told me that her husband, Alan, now refuses to go there since they started selling the Bialys pre packaged after a change of ownership. 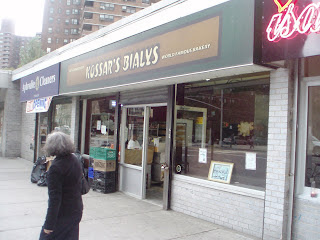 I am not sure if my chortling offended her, but Sandy announced that she had to head off to her own life which left me to potter around for a while before heading off for supper.

I am, thankfully free of most of that silliness, but I do have an Achilles heel and it is pizza. I can’t stand the stuff and for years have bored anyone who will listen and plenty who wont by describing it as “snot on toast”

It is just one of those things I just don’t get. Why would you do such a thing to even half decent ingredients? It also seems to be entirely racially based. I could be had up in front of The Anti Italian Defamation League on some charge or other because I eat Turkish Pide like a good un, hell, I even eat cheese on toast, which being doughy and cheesy, is basically the same thing.

But, the thing that people love about this “Italian” speciality, its mix of dough, tomatoes, cheese, meat and slicks of olive oil, just turns me off. I know it’s my failing, but I also know I just don’t like them. So sue me.

People have tried to convince me otherwise and convert me to their evil ways but, so far, without success.

That night, my chums Beth & Peter Pizio were going to take another stab at it and, as agreed, I met them at Beth’s office in time to have a little Dutch courage in the form of a couple of pints of Guinness before heading off to the scene of, what they hoped would be, my Damascene conversion. 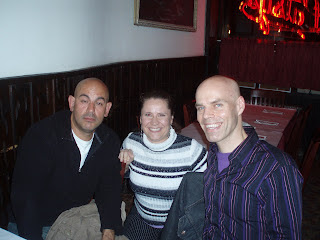 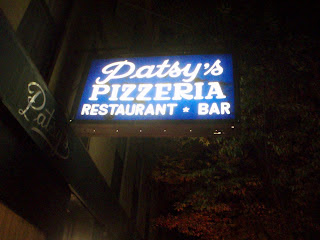 What can I say? The salad was nice. The pizzas were enormous, well of course they were, this is, after all NYC. On one, Garlic and basil with some anchovies on my bit. On the other, ricotta and sun dried tomatoes. I wanted to like it if only to please Beth and Peter who are excellent fellows and I really did try eating a slice of each, but in truth I was more taken with the cute waitress from New Zealand and chatting to my chums than I was with what was on my plate. 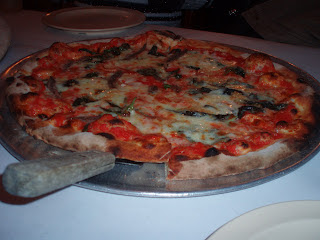 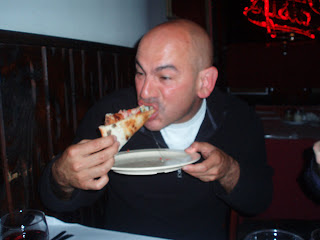 Those of you who know me will tell you this is a rare occurrence.

Beth and Peter insisted on picking up the tab which was incredibly generous. When they come to London, I am treating them to a Pork Pie and I will be equally as hospitable as they chow down on chunks of lardy pastry and fatty meat (yum!) See how they like them apples

After supper, they walked me almost all the way home across town to Sanjoy & Evelyn’s flat before saying goodbye and heading uptown to their own place.

So it was another fun day in NYC. Spent in the company of hugely agreeable people. I also got to try two more uniquely American foods, red sauce Italian and NY Pizza.

What can I tell you? I just think it is good of New York to take the blame for them.
Posted by Hermano 2 at 2:52 PM

April 9, 2008: Stopped by Kossar's Bialys today and was relieved to see that only paper bags, not plastic, were being used, in a return to form.