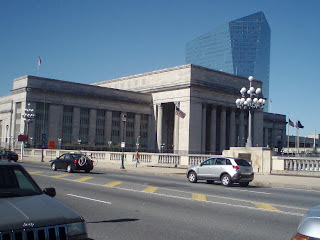 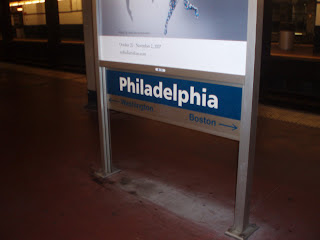 Compared to many parts of my journey, the trip from Philadelphia to New York City is a bloody easy one. About an hour on the train. Of course, New York being New York, things are never quite that simple and, when I woke up in my Center City hotel and switched on the TV, I found out that there was a strike by the taxi drivers of NYC that very day.

Mind you, I am not quite sure how you can tell when NYC taxi drivers are not on strike as they do seem to be one of the more pathologically lazy group of people I have ever encountered. Right up (or down) there with their equivalents in Beijing. Any more indolent than that and they would probably be dead.

For a city that offers the amount NYC does, the lousiness of its taxi system is one of the few things that should make it hang its head in shame. But, I digress.

As you can probably tell, my relationship with NYC is an interesting one. I have lost count now, but since I first started travelling on business in the 90’s I have been to NYC dozens of times and, since my first visit in the mid 80’s it could be close to a hundred times.

The sense of excitement I felt when I first used to visit has long gone. That is no bad thing. It has been replaced by a sense of comfortable familiarity borne out of extended stays in particular neighbourhoods and long weekends, between weeks of publishing work, spent exploring not just Manhattan but other parts of The Five Boroughs in the company of friends.

Ah, friends. Having people you know to show you around or host a meal for you is what makes a visit to any city special. Doubly so in New York where the variety of what is on offer is often bewildering.

I am lucky that, in NYC, I have many people I consider friends. I also have a number who would not give me the steam of a sweaty pig if I was freezing, but that’s another matter. Over the years they have invited me into their homes, introduced me to their favourite places to eat and given me a view of the city that would have been otherwise impossible for a visitor.

They are an odd lot though and, as a European and a Brit in particular, their ability to develop almost child like enthusiasms for people and places and to turn on the same in a short period can be alarming.

They work in a binary mindset where a restaurant can go from being the very best example of its kind in the whole wide world ever to being worthless and only producing food fit for pigs all within a matter of months. The same for people ,who can go from being bosom buddies to sworn adversaries in the same amount of time.

And, obviously, there is the whole language thing. New Yorkers have a tendency to say what ever the Hell it is on their mind, even if that may not be a particularly good idea and the air is often filled with the sounds of irony whizzing over their heads.

This, of course, is a generalisation but, one that I have found to be pretty accurate on my visits. Being a bit that way myself, it will come as no surprise to say that I like New Yorkers a great deal. Not least for the fact they are incredibly easy to wind up.

New York City remains one of my favourite places on earth. It is, obviously, amongst the great cities in which to eat and there can be no more loyal friend than a New Yorker. Mind you, if they turn on you, you should probably go and hide in a bunker somewhere for a few years.

I had allowed myself a week in the city on this trip. Not only to allow me to fit in as many of the food places I wanted to try, but also to allow me to spend time with my family. For the last forty years, my Aunt and Uncle, Sanjoy & Evelyn have lived on The Upper West Side (well,in fact, The Upper, Upper West Side) and no trip to New York would be complete if I was not able to spend a great deal of time in their company or, as was the case this time, to stay with them for the duration of my visit.

After the train shuddered through New Jersey and pulled up at Penn Station, I prepared myself for the trauma of heading up to my relatives’ house on the subway. For those who know me both in London and New York, it will come as something as a shock to say that I have become rather fond of public transportation. I have been forced to given that my limited budget does not extend to chauffeur driven limos everywhere.

It was all pretty easy, given that I didn’t even have to change. Although, I was reminded about where I was and about the joys of dealing with New Yorkers the moment I boarded the train with my ever so large rucksack, Big Red, on my back.

I am as aware as anyone of the lack of enjoyment involved in having a large rucksack shoved in your fizzog by a young traveller. So, once on board a tube, I always take mine from my back and rest it on the floor between my legs where it can’t do any harm ( there is a joke in there somewhere)

This was obviously not enough for one local who made loud protestations to everyone but me about how “thoughtless” and “stupid” it was for someone to try and take the subway with such large luggage. The fact there was a taxi strike obviously had not entered his thick skull not had the fact that he was a bit of a fat lad and was taking up far more room than me and Big Red put together. I was tired and in no mood to listen to it so put on my best Ben Kingsley in “Sexy Beast” shit and turned to him snarling

“Do I really look like the sort of person who gives a flying fuck what you think, fat boy?”

He turned an interesting shade of red and whimpered “no” before getting off an the next station. Not the ideal re-introduction to the city, but I felt better when the man next to me smiled and said ‘good for you”

By the time I reached Sanjoy & Evelyn’s apartment, I was sweating like a mule from the heat in the subway and from having to lug my rucksack from 110th St. But, the moment, I stepped from the lift into their cool living room, I felt at home. 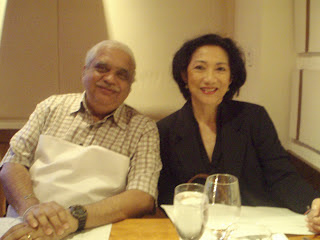 In the last twenty-five years, they have become my second parents and their apartment like a second home. I know every nook and cranny of it from the bottles of fine wine that Sanjoy collected in his days with Rothchild’s to the art they collected with such enthusiasm in the 1970’s when Evelyn’s successful career as an opera singer took her all over the world. After a few weeks of hotels, it felt good to be home.

I dumped my bag in the room I always use when I am staying there, showered and put on some comfortable Indian cotton trousers and went to sit in the kitchen to watch Evelyn do what she does best of all, cook. The same age as my mother would have been, Evelyn is one of the greatest cooks of Bengali food I have ever encountered. Like my mother, she developed the skill at the beginning of her marriage from her Mother-in-law and damn is she good at it. 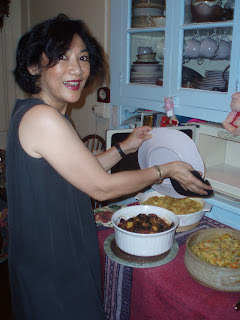 She knows that, when I arrive, in NYC and at their flat, the first thing I want to do is raid the fridge to see what left overs may be in there. It is always packed to bursting and, I only realised recently that she cooks “left overs” specially so they will be there during my visit.

This time, I pulled out some simple vegetable dishes and some plump shingara, a Bengali version of a samosa stuffed with cauliflower and sat at the kitchen table while Evelyn prepared yet more food, this time for a dinner party that evening.

A little later, I had a vague notion to head down to Barney Greengrass, a famous deli on The Upper West Side, for lunch, but saw, when I arrived, that it was closed. I made a mental note to visit it later in the trip and went off to do a bit of shopping before heading home to enjoy the fruits of Evelyn’s labours.

Sanjoy was home by now and, like all good Bengali men, sitting in his pyjamas expecting the world to rotate slowly around him making sure that his every whim was catered to. As always, he bickered agreeably with Evelyn until the guests arrived and he could bicker with them too. Given their backgrounds, they have an incredibly eclectic collection of friends and tonight saw us sitting down with ethno-musicographers from Columbia University, realtors from New Jersey a hotel manager, some friends of Evelyn’s who were devotees of the same guru and a young Spanish economics student who Sanjoy had accosted on a bus one day because she was reading a book he admired.

Evelyn’s food is simple and packed with flavour. Every bite reminds me of my mother, her own cooking and the dishes I would long to try again. 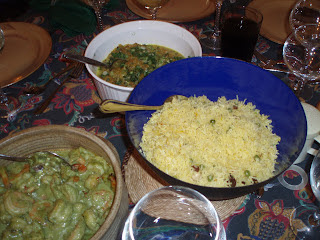 The atmosphere at the table is incredibly convivial and the conversation loud and raucous. Usually, Sanjoy starts an argument and then sits back to watch the unfolding chaos with a Buddha like smile on his face. A lot of people think I am rather like him. I have no idea why. 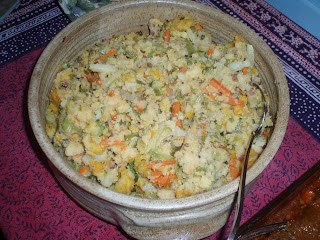 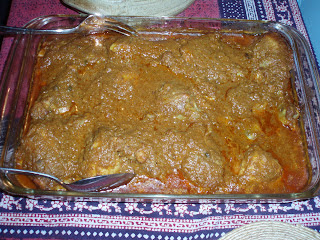 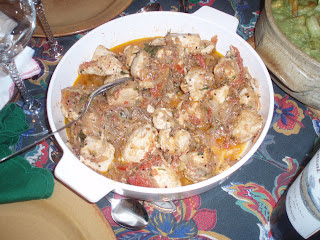 They did not leave until 1am, by which time, I was bushed and ready for bed. Sanjoy had upset just about everyone, so his work was done too and he retired to bed, happy. Evelyn was busy wrapping up food

“you’ll want some leftovers tomorrow wont you?” She asked

“What for leftovers?” she looked at me quizzically

And, with that I went to bed. Jolly glad to be back in New York City.
Posted by Hermano 2 at 3:14 AM