SALVADOR, BRAZIL: FISH FOOD IN A SHARK TANK
When I first thought about going around the world eating food. I envisioned that it would be a trip filled with smiling faces, tables over burdened with food and local lasses offering me their tastiest, er titbits.

What I did not expect was to be prodded in the chest with a gun by a Brazilian airport guard.

The journey had begun badly with a flight on Brazil’s flying gulag, TAM. We landed at Sao Paolo on time and were told by the stewards to stay on board if we were continuing on to Salvador.

So, I stayed put.

Then, we were told that we had to get off here and clear customs and immigration.

So, I got up to leave

Then, we were told that we should remain seated and would clear customs and immigration in Salvador

So, I sat down again

Then, we were told to get off the plane and clear immigration and customs in Sao Paolo.

So, I got off the plane

When I asked where I should go, the staff just shrugged their shoulders. I finally found the baggage claim area and lugged Big Red (remember? It’s big and it’s red) through customs.

I found myself outside the airport and with not clue number one where I should be going.

I tried to get back inside, but was stopped by security and told to join a queue about a mile long. I told them I had a connection and tried to walk past the guard at which point he pinned me to the wall with his rifle. A lovely, lovely introduction to Brazil.

I was not the only one. There were others on my flight who were in the same predicament. One, an old lady, was sobbing loudly, another was carrying a small child. It was a scene right from Hell.

Finally, I found a member of TAM’s staff who did not pretend that they could not speak English and the group of about twenty of us were led past the Security guard and into the airport. I flicked him the UK "V" sign. I am glad looking back on it that he probably did not understand.

It appeared that we should have stayed on the plane and it was about to leave, with our without us so everyone, including, if you recall, woman & child and elderly lady had to sprint to our gate where we arrived to be told that we had just made it.

It was, of course the same plane and I was in the same seat next to the same man who had flown with me from Argentina.

“how did you get on so quickly?” I asked him

“Oh, I am used to it” he replied “I just stayed in my seat. I thought it was strange you getting off”

I am not sure who I wanted to kill more, the people of TAM or him for not telling me.

If any experience was going to sour you to a country, this was going to be it. But, I wanted to give it a chance, so sat back and tried to calm down for the short hour of the flight to Salvador.

My pick-up, at least was there when I arrived and, as we drove to The Barra, the port area of Salvador, I began to think that this might just turn out alright after all.

I felt even better when I saw my guesthouse, The Estrelo Do Mar which was basic but beautiful with blue tiles and wide balconies. Best of all, it was a few minutes walk from the stunning beach. 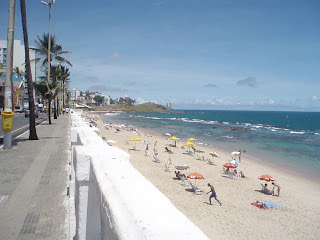 I changed into my shorts immediately and headed out to explore, my backpack over my shoulder.

“you are not going out with that bag are you?” The man behind the reception said.

“I wouldn’t advise it” he added. “just take enough cash for dinner and keep your camera hidden. There have been quite a few muggings”

Oh great. Just peachy keen. I knew Brazil had a reputation for these things, but I had also heard that Salvador, particularly by the beach was OK. I had a friend who had been here a few weeks before me and had no problems at all.

Once I went outside, I could see what he meant.

I know fear breeds paranoia, but in Salvador, I never really felt safe. I felt as if ever eye was watching me and every person was viewing me as a potential mark. It may have been unfair, but it was a feeling that never really escaped me.

A great shame as the beach area is lovely including, men selling coconuts from which they swipe the tops off with worrying looking machetes before inserting a straw for you to suck the chilled liquids through 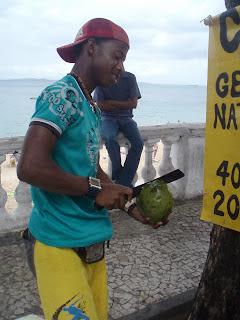 I had a supper which consisted of meat, rice and chips washed down with a Brahma beer and headed back to my hotel slightly dispirited about the thought of spending the next five nights looking like a walking $ sign. 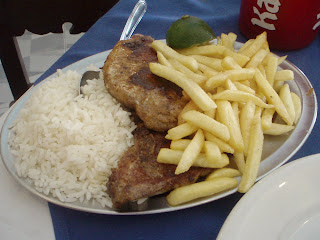 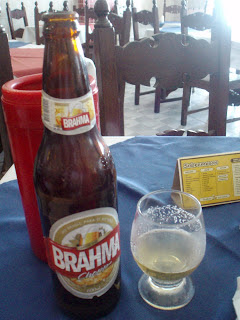 The next morning, however, after a good night’s sleep, I decided I was going to make a good fist of it. I started with a superb breakfast, one of the selling points of the guesthouse. Fresh fruits, semolina cakes, warm bread and strong tea. I felt better immediately and began to strike up a conversation with a young Chilean woman called Macarena, sitting at the table next to me.

She too was having a few days break and told me that in The Pelhorinio that evening it was going to be party night with bands playing and lots of dancing. She did not want to go on her own, so I said that, despite my aversion to all things dance oriented, I would join her.

After breakfast, I set out to explore, without bag, of course.

I must have walked about ten miles. Up from the beach area, through the town and down to The Pelorinhio I had been chatting about at breakfast. In the day time, it was, quite frankly, an ugly tourist trap where every corner held a hustle. I rather disliked it and could only hope that, in the evening it would be a bit more fun. 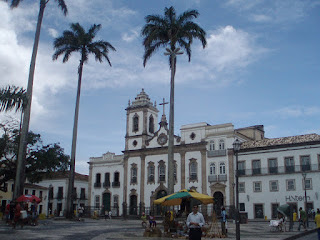 I fought my way through the peddlers and cab drivers to the Elevador Lacerda, a huge elevator, which links the top of the city with the lower city. At the bottom was a market and stalls selling food where you were able to sit and watch young men from the local projects performing Capoeira, that distinctive form of martial arts developed by slaves under the guise of native dance. 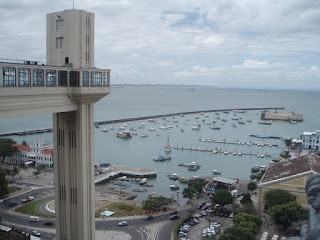 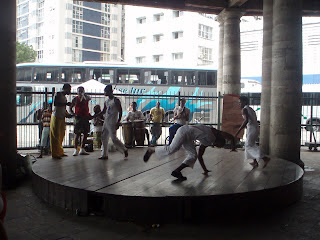 It is impressive as, indeed, is the ability of the men performing to prise money out of anyone who stops and watches them for more than three seconds.

I will be honest, at this point, Salvador had not impressed me and, if I had the choice, I would have high tailed it out of there less than two days into my stay.

Fortunately for me, it was going to get better. Not that the town itself ever held any great allure for me, but that night, when I arrived to meet with Macarena for the evening, I found that we had been joined by three others in the guesthouse. Chiara was an Italian working for The Red Cross, Tom & Barney were travelling around Brazil celebrating thirty years together.

They were a lovely crowd and it promised to be a fun evening as we headed up to the old town and joined in the party. Every Tuesday night the locals and tourists get together and have a big old shindig. It is a hell of an event with live bands playing, drums sounding and deafening noise wherever you turned.

Our group was adopted by young local, Elvis who took us under his wing in the hope of getting a few $ at the end of the evening for looking after us. He was a nice kid and offered to show me where I could go and buy a few cans of beer to drink while the bands were playing. 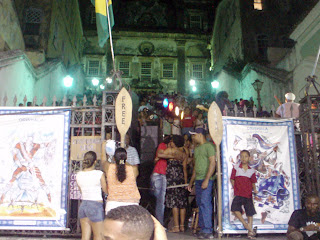 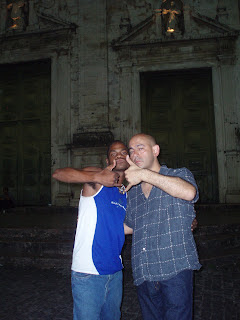 When I came back to our group, I saw that we have been joined be another woman, Sybil who, it turned out, was from L.A. it threw me a bit because, despite her looks (she is originally from The Philippines) she spoke as if she was from the cast of Beverly Hills 90210.

It also turned out that she was staying at a guesthouse close to our own and that was it, we could not shake her off no matter how hard we tried and, God how we tried. As the clock struck midnight, Elvis suggested that it was a good time to be heading back to the relatively safe enclave of The Barra and poured is into a cab after we had pressed a few notes into his hands.

The party may have been over, but we were not. We were all starving and headed down to a restaurant near the front where we drank far too many Caipirinha and shared a Moqueca, the local seafood stew made with coconut milk and the rather noxious Dende oil that is used to cook just about everything in this part of Brazil. 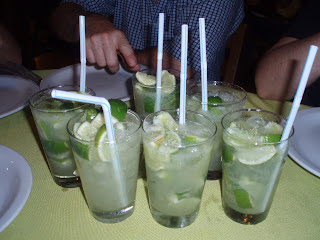 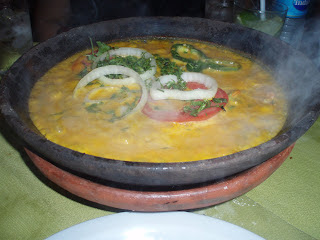 I am not quite sure what happened after that. I am told I went dancing which is as unlikely and image as it is unpleasant.

It was a long night and I think I got to bed about 2am, which for a man of my advanced age is none too shabby.
Posted by Hermano 2 at 1:27 AM