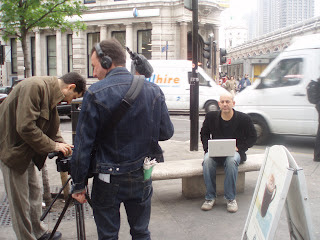 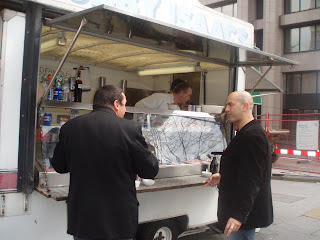 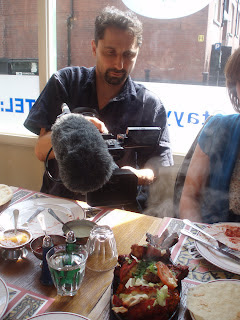 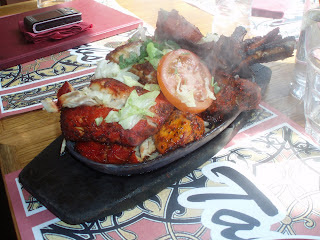 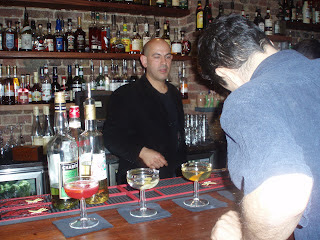 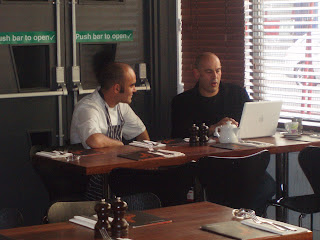 FILM MY GLOBE: FEELING ALRIGHT WITH THE CREW
If someone had told me a year ago, when I was sitting across from a foreign publisher trying to sell them a few books, that this year, during the LIBF, I would be wandering around the streets of London being followed by a film crew, I probably would have laughed in their face.

But, hey, life is full of surprises.

In this case, the surprise was a meeting with a small but prestigious production company who thought that EAT MY GLOBE may just be a good idea for a TV series and were willing to commit to make a trailer to pitch to potential broadcasters.

So today, when my ex colleagues were at the fair, I was eating my way around the capital and trying to choose an angle that did not show off my massive lugholes.

Thankfully, they had put me in the capable hands of an patient and skilled director, Phil. An excellent sound man, Mike and a trooper of a production assistant, Cher and I was made to feel more at ease than anyone who looks like me has the right to in front of the camera.

After a coffee and a few shots in Smithfield Market, we made our way to Tubby Issac’s Seafood stall for the first main set up (see how easily I drop the words “set up” in the mix just like a real pro?)

On the way, we winged it a bit and they filmed me walking into a Newsagent that was offering “ Healthy Eating” by way of sandwiches for 99p. Grim, doughy bread and filling of no discernable provenance. I took one bite and did not have to feign a grimace for the camera as I spat it out and threw the rest in the bin.

Tubby Issac’s was much more fun. They crew filmed as I dived headlong into some jellied eels with malt vinegar and then talked to some of the other people who had come there for their lunch. Paul, the owner, suggested I try some with his special stash of “extra hot” chilli vinegar and, being a brave little soldier, I did. Bloody hell, it almost took the top of my head off which may make for great TV but will almost certainly lead to a Johnny cash moment in the morning.

Across from Tubby’s is a Halal burger stall, we filmed me buying a burger from the very sweet couple who were running it and I felt bad that it was so dreadful that it too went in the bin after one bite. I felt slightly less sorry for the owner when I saw him drive off in his big Mercedes Benz

Now it was time for lunch proper and the guys asked me if I knew where to go. Well, of course I did. I had been unable to attend a memorial dinner for Tony Finch at Tayyabs last night so, it seemed the perfect place for me to pay my own tribute by way of lunch. Well, Wasim did Tony proud. The lamb chops of course, some fish and chicken tikka and some tandoored panir were followed by three curries and the unbeatable Tayyabs roti.

Phil got rather excited by this ( or rather disgusted by my table manners) and whipped out his camera to film the food and me giving some bones a lot of gnawage. I guess this TV show will have an R rating (R for revolting )

Pretty full up by now as you can imagine, but we had one more stop to visit the good folk at the blessed Hawksmoor where we had set up a scenario where I was going to be a pedant and a bit, well of an asshole. I know, I know, it is almost impossible to imagine but I called upon my childhood performance as The Mean Little Postbox in junior school and dragged the character of knobhead from the depth of my soul.

First Nick Strangeway plied me with a girly pink cocktail which I threw aside in disgust and came around the other side to make my own Martini. Then I ordered a steak rare and looked suitably less than gruntled when it came out medium ( it didn’t of course, I don’t think Carl is capable of cooking a bad steak if he tried – but hey, this was acting remember ) so I stormed the kitchen and again cooked my own

The staff at Hawksmoor were well up for it for which I am of course, hugely grateful.

And, that was that. A few shots to camera (see, taking to it like a pro) and it was very much “a wrap”

I have no idea, at this stage if any thing will come of it, but it was huge fun and working with an experienced and talented TV crew was a real eductation.

I knew that EAT MY GLOBE would take me in all sorts of interesting directions and give me the chance to meet interesting people. Who knew that it would not just be about the food?
Posted by Hermano 2 at 11:59 AM

Excellant, I have loved reading your travels so far it would be great to see how your story unfolds on screen. Nothing will escape the rath of the camera!