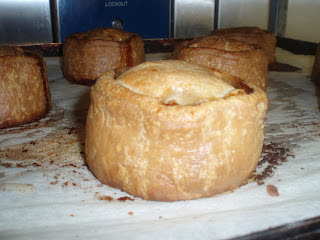 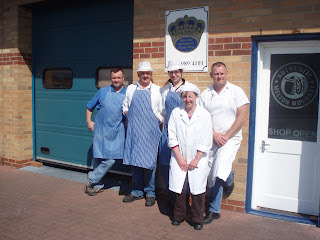 Every Saturday at 8.45am, come rain or shine, a similar scene is played out in Borough Market between a handsome forty something of the slaphead persuasion and a gruff northern gentleman, in a white hat, from Melton Mowbray.

SLAPHEAD: Are you open yet?

MAN IN HAT: Do we look open?

SLAPHEAD: I just want a pie

MAN IN HAT: I haven’t even had my coffee yet

SLAPHEAD: Can’t I just get a pie before it gets too crowded?

SLAPHEAD: Please, I have to rush off somewhere

OK, I grant you, the last scene in Casablanca it ain’t, but it certainly could be the beginning of a beautiful friendship.

For MAN IN CAP in this instance was played to the hilt by Mr Ian Hartland, the Borough Market face of The Hartland Clan who now own Mrs King’s Pork Pies, officially the greatest product to ever come out of the UK.

Now any product containing Pork and Lard is going to find it hard not to contain a excess of deliciousness. But, a Melton Mowbray Pork Pie takes it to a whole new level as I was about to find out.

Obviously, EAT MY GLOBE is about the food, but it is also about the people and if I am lucky enough, on my travels, to meet a family who are as much fun as the Hartland’s then I am going to enjoy my trip a great deal.

There’s Paul, the eldest. Ian, the front man. Neil, the youngest brother. Jane, who seems to do most of the work and Adam, Ian’s eighteen year old son who seems to come in for the most stick. Together, they combine to create a working environment akin to The Marx Brother’s Duck Soup while turning out perhaps my favourite thing to eat in the whole world, a Melton Mowbray Pork Pie

When I arrived at there tiny unit in the village of Cotgrave and walked through the door the first thing that hit me was the smell of baking pies. Surely, this is the smell of heaven. A meaty, savoury aroma that had me wanting to strip off and roll around in pork pie jelly.

I wanted one and I wanted to know how they made such a thing of beauty.

But, first things first. By the time I arrived, it was lunchtime and work came to standstill as everyone, me included chowed down on sausage sandwiches and big mugs of tea to provide a bit of much needed sustenance for the rest of the working day.

And, it is hard work. Between them and in between the banter, The Hartland’s turn about 1000 pies a week, more at Christmas. Each one of them made and stamped with little mechanical aid, baked to perfection and then individually filled with hot jelly.

After lunch, the history lesson.

Mrs King’s Pork Pies originated in 1853 and has been through a number of hands before The Hartland’s took it over 18 years ago. They knew little about the business but Paul, the eldest married into the family of Jack Parr, the owner of Pork Farms, a massive producer of meat products in the North, who by then had bought Mrs King’s. When Mr Parr retired, the brothers came on board.

It was Mr Parr who taught them how to hand raise a pork pie and for the first few years they made every single pie the traditional way. As the popularity grew, however, this became impractical and they had to bring in some modern methods.

I say modern, but that is all relative. The pie stamps they now use in the moulding of the pies are two hundred years old and the pastry mixer nearly a hundred. As much as possible they still like to do things the traditional way. They butcher their own meat, fill the pies with jelly by hand and still hand raise the larger versions.

A Melton Mowbray Pork Pie is a very special animal, er or bits of an animal. With only six ingredients in the whole thing. Lard, water, flour, pork, white pepper and salt it combines to create a unique product and one that is about to receive an official geographical protection.

For years, anyone who made a pork pie has been able to slap the name “Melton Mowbray” no matter what kind of soggy crust, grey meat monstrosity it is. That’s all about to change and from now on when you see those magic words it will mean a pie made with hot water paste, pure pork shoulder ( the right ratio of 70/30 lean meat to fat) and will have at least 45% meat content more than double the legal requirement.

Melton Mowbray became the centre of the Pork Pie world for two reasons. The first was that it was six hours from London by coach which, two hundred years ago was the point at which horses pulling stage coaches legally had to be rested. This led to stalls and inns being set up to feed hungry travellers who needed a filling food that could be carried with them without breaking. Hence the hard crust.

The protective crust also made it the perfect snack for hunting folk who were leaping fences and hedges and hunting to hounds, a sport that had become popular in the area after the enclosures act.

OK, enough of the damn history, I wanted to know more about the pies.

First, Ian showed me the lard. This is no ordinary lard though, this is Italian lard. That creamy, milky white, soft magnificence that is so delicious with chunks of bacon and crispy onions through it when spread on toast.

This is mixed with the same amount of water and double the amount of flour before being mixed and rested. After being rolled out, it is cut into bases and lids and filled with a coarse mince of the pork shoulder before being rested again.

It is baked until the centre of the pie reached 100o’s and then left to cool before being filled with the jelly. Ah, the jelly, my favourite bit of all. Made from boiling the pig’s trotter until it releases all its gelatinous goodness and then strained to produce a pure liquid which is poured through two holes in the top of the pie which is then chilled until the whole thing is set.

And, there you have it. The Melton Mowbray Pork Pie. One of the simplest products you can imagine and impossibly delicious.

The real problem is to get the nervous and the stupid to try them. Most people turn their noses up at them, particularly women who think they are unhealthy but then go and shove the myriad chemicals of a ready meal down their gullets.

Ian gave me a run down, nation by nation, of the reaction to his porkie wonderment. The nervous Americans with bum bags, of course, wont go near them, the French quite like them and so do the Germans. Most of all though, he tells me, The Spanish love them. I knew there was a reason I liked the Spanish. It is their love of all things pork. Good for them.

How about us brits? Well, we associate them with, to quote Ian “ big, fat, ugly men who drink a lot of beer” See, I knew I would be the perfect demographic for something.

But, The Hartland’s are quite happy with this. As Paul said “ we are never in fashion, but we will always have a business because the people that love them really love them”

And, God, I love them. A slice of Melton Mowbray Pork Pie (Mrs King’s, of course) with a slab of sharp cheese, a few pickled onions and some chutney all washed down with a pint of real shudder making bitter is the stuff that this country was made on and thankfully it is beginning to reappear on menus as gastro pubs look to regional food.

A few hours after I arrived, I left the Hartland family bickering happily in their small space while I walked seven miles back to Nottingham through glorious countryside. In my backpack, a pork pie, a parting gift from Ian.

Like I said, this could be the beginning of a beautiful friendship.
Posted by Hermano 2 at 2:13 AM

I just absolutely LOVE Melton Mowbray pork pies. I could almost taste one while reading your blog..

I got married and moved to USA a few years ago.. Ian was right about the americans... there is not a pork pie to be found over here, and if you ask at a store if they have them you get the strangest looks....

I cant wait til my next visit to the UK... Pork pie and wendsleydale cheese, with a good helping of branston pickle.. mmmmm