DAY THREE: GRABBED BY THE BLOGGERS
EAT MY GLOBE is, if anything, about the people I will meet and, when I decided to head off on my travels, the one thing I decided to do was to get in touch with all of the like minded bloggers around the world and ask them to show me around their city or at least to point me in the right direction.

Some, quite rightly, ignored my mails as the ravings of an internet loon. Others gave me some helpful suggestions and a few even took the risk of agreeing to meet me face to face.

First up was Sydney’s very own Helen Yee, author of the foremost Sydney Food blog GRAB YOUR FORK.

We swapped a handful of e-mails and then she suggested we meet for a late lunch in Chinatown with very firm advice that I was not to miss the opportunity of seeing Sydney’s Grower’s Market before hand.

Now, I am usually, profoundly wary of grower’s markets. There are only so many stalls selling apple juice and badly made cheese I can look at in a life time and, to be honest, Sydney’s is not much different. A lot of exceedingly well meaning people standing behind little stalls with freezer boxes full of stuff that I am sure is all very tasty but, well just a little bit dull. I will probably be drummed out of the Blogger’s union for having the temerity to say so, but Hey Ho! 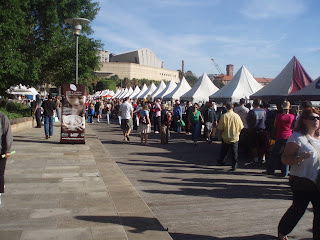 Great location, mind you, right by Darling Harbour and, once I given the market the obligatory once over, I bought a copy of The Sydney Morning Herald and found a nice quiet spot to sit and catch up on the World’s news. Rather a good paper it is too, by the way and, its Saturday edition was about an inch thick and occupied me for a good couple of hours (as opposed to the twenty five minutes I had given the market)

By now, it was rapidly approaching meeting up time and I wandered to the bottom of Sussex St to find Helen waiting as planned by a strange little gold painted tree that symbolised the Earth’s mating with the sky or something like that.

Now, Helen is what I would call an uber food blogger.

One of those who puts what Dos Hermanos do to shame. GRAB YOUR FORK is a very lesson in how to create a foodie resource for your city. Links aplenty, good writing and pictures, well the pictures are another thing altogether. Whereas Dos Hermanos whip out a small digital for our blurry shots, Helen lunges into her bag and brings out an entire studio’s worth of paraphernalia. She carefully sets up the shot and takes multiple shots just in case. A true professional.

Now, all of this could be a little bit weird if it was not for the fact that Helen really loves her grub. She really knows her grub too and she gave me a detailed and loving tour of the area around Sydney’s impressive Chinatown. There are restaurants here for regions of China that I didn’t even know were regions. There are great Korean restaurants, noodle bars, sushi bars and all points in between.

Perhaps, Sydney’s greatest treasure is its food courts. Unlike their UK equivalents which are to be avoided, here you get whole floors of shops offering a bewildering variety of Asian fast food much of it coming in for under AU$10( about £4.50) Helen has views on this too, well of course she does. She gave me a tour of the three main food courts telling me which were worth visiting and which were not. Then a tour outside to show me her favourite places for seafood, dumplings, sushi, BBQ pork and any number of others.

Now, Helen is a woman after my own heart and, despite the fact she had just had Yum Cha with her family, she was happy to indulge in a late lunch. We lighted upon a Vietnamese place because Helen had found out my secret shame that I had never had a Bahn Mi ( a Vietnamese pork Sandwich) She, of course, had views on which was the best place for that, so we ended up in a small, empty little café chowing down on a crunchy baguette filled with salad and three types of pork. It was fine, but my life would not have been any the worse if I had never tried one. 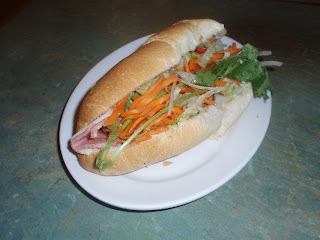 Much more interesting was a well made beef pho and the fixings for some hand made beef rolls. 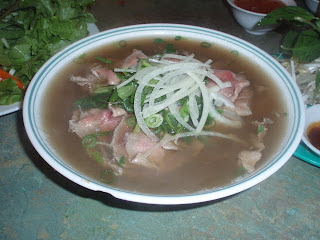 Helen was an expert at these and, while I made something that looked like a tampon for an elephant, she created delicate little cylinders which she then dipped in sauce before plopping into her mouth. All the while, I was busy trying to scoop my mess off the table. 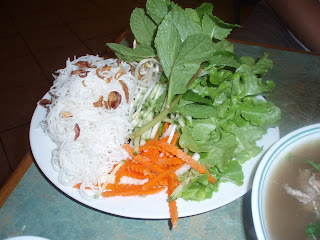 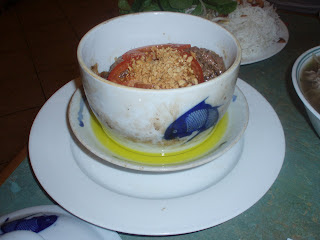 She was too kind to mention it, but I blushed when she handed me a perfect example of one just in case I starved.

A couple of hours after I met her, Helen had to whiz off to get ready for her own trip to Japan, so we waved goodbye at Central Station.

This is exactly what I was hoping for when I first came up with the idea for EAT MY GLOBE. The food AND the people all thanks to the power of the internet and a mutual obsession with shoving stuff in our gobs. Even if, like Helen, they do it with so much more grace than me.
Posted by Hermano 2 at 11:47 PM

would you like to come to Trinidad & Tobago, land of Steel pan & Carnival and sample some of the food here? 50% indian orgigin & 50& african origin give an inetersting mix of food, with some chinese thrown in for good measure!