SYDNEY: TAKE A HIKE, BABY
If I am being brutally honest, I spent the next few days of my time in Sydney being slowly less than whelmed at its reputation as a great foodie town.

That is not to say that I did not have some decent meals and some good things to eat, I did. But I found it limited in a way I had not expected.

The food courts and the offerings of Asian food are, of course, astonishing and I spent a number lunchtimes wandering around Sussex and Dixon Sts sampling some of the places that Helen Yee had deemed worthy of visit. I had little reason to doubt that she would be correct and, as I suspected, she was bang on the mark.

BBQ King is a bit of a local legend not least because it is open until the wee small hours and is a hangout for off duty chefs including, Tetsuya. A plate of BBQ pork & rice was very good, but ( as Helen warned) over priced at $15 but worth it for the “you finish, you leave now” theatrics which saw my plate whisked from my grasp the moment the last piece of dead pig hit my mouth. 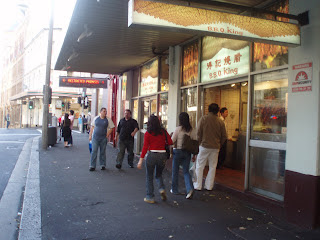 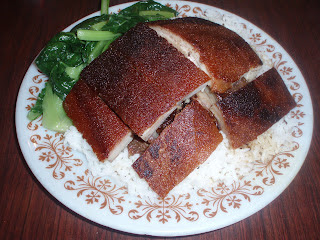 The Silk Road restaurant introduced me to Chinese cookery from a region new to me. The people from the Urgyur region are predominantly muslim and specialise in lamb dishes which the serve with noodles more akin to pasta than some of the other offerings in the region. Also, fantastically, eye wateringly spicy skewers of tender lamb. 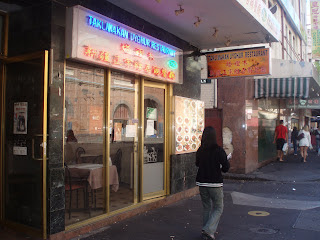 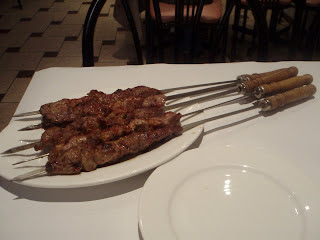 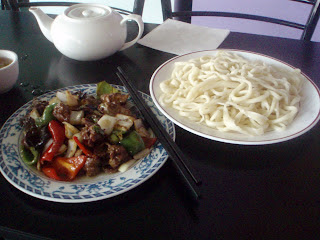 Golden Century offered the opportunity to point to a tank and benefit from the untimely death of the inhabitant simply prepared with chilli, ginger and garlic.

Harry’s Café De Wheels is a local legend. A small van by Pott’s Point that has provided meat pies to celebs, bikers and workers alike for over 70 years 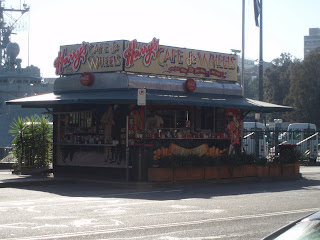 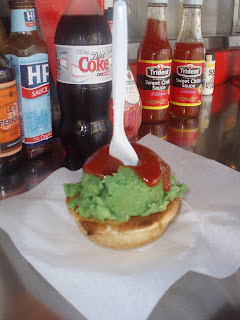 The restaurant scene “ proper” is another matter. There are some good restaurants, of course. Some great ones, in fact with some of the Three Hat places, like The Pier, Bacasse and Tetsuya, comparing favourably with anywhere in the world. It is in the mid range that I found a lack of depth. I had some enjoyable meals at Bistrode, Bentleys and Fish Face but little to make me imagine I would crave revisiting them when I am back in London. Obviously, I did not get to try all the places I would have liked as time and budget did not allow, but my overriding impression is of a city that is, in dining terms, not as great as it likes to think it is.

Where Sydney is every bit as good as it likes to think it is ( and trust me that is a hard thing to achieve) is in its assertion that it is amongst if not the most beautifully located city in the world. It truly is and damn, don’t the aussies know how to make the most of it. I have seldom seen a city so filled with people making the most of what a city has to offer. Jogging, cycling, surfing, kayaking, windsurfing, every person in Sydney seems to be obsessed with at least one of these pastimes and few places on earth give them such a chance to exercise.

It may surprise those people who only know me through my love of food, but I am actually a reasonably fit chap. I love to run and, as a qualified Personal Trainer in my spare time, I spend a lot of time in the gym. Most of all, though, I love to hike.

I first got a bug for it during a walking holiday in New Zealand a few years ago and now, whenever I am travelling for EAT MY GLOBE, I always try and fit in some serious walking.

Well, there are few better opportunities than in Sydney. A short ferry ride from Circular Quay finds you in Manly, one of Sydney’s many weekend playgrounds and the location of the Manly-Spit walk (about 23km round trip) which takes in some of the most breathtaking coastal scenery I can ever recall. A fabulous way to pass four or five hours. Similarly, 10km from the city brings you too the legendary Bondi beach where I spent a happy four hours hiking from the beach to Coogee along a benign but scenic route along some of New South Wales’ spectacular surfing beaches. 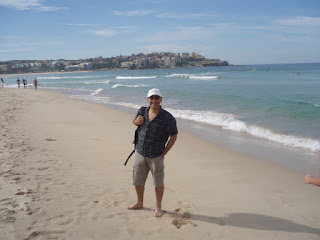 If the food offerings were, on the whole, a disappointment, they did at least give me the opportunity to meet some fantastic people.

At Fish Face, the scene of one of the better meals on my trip in Sydney’s achingly trendy Darlinghurst, I met the Chef/Owner Stephen Hodges. A hugely abrasive, witty man who took great delights in telling me how many people he had fallen out with in his career and who invited me downstairs to his fish processing area to watch him gut a kingfish.


There was Simon Thomsen, the coruscatingly witty food critic for the Sydney Morning Herald, who invited me to join him in a long and booze infused supper at Bentley’s which resulted in me having to spend the rest of the next morning in bed.


Charlie, the young mixologist at The Bayswater Brasserie, plied me with four lethal cocktails and restored my faith in Sydney’s ability to mix a decent martini.

Finally, and perhaps best of all was Jeanette. An irascible Mauritian who, supposedly was the cleaner at my hostel but who seemed to spend most of it being rude to the guests. She seemed to hold me in particular opprobrium and had my card marked as a “whining pom” which, it appeared gave her the right to yell “POM” at the top of her voice every time she saw me while waving the palms of her hands at the side of her head in a satirical imitation of my own large and flappy lug holes. Apparently, this meant she liked me and, when she heard why I was off around the world, she questioned me about my knowledge of Mauritian food. Fortunately, my mumbled reply of “adobe” and “curry goat” passed muster and every day for the rest of my visit, she brought small parcels of food for me to eat as she hovered clucking over me looking for signs of approval. Very good it was too and, I like to think that, by the end the Mauritian and the POM formed a bond of understanding. Not enough, of course, to allow me to take a picture of her as, she quite rightly explained “ I am not a f**king freakshow” fantastic.
Posted by Hermano 2 at 2:59 AM