FINALLY FINLAND: A FEAST FROM A PRINCESSA
The next morning, Henry and Niko had threatened to take me out hunting and I promised that, if I was awake at 6am when they were leaving, I would join them.

I opened my eyes at about 8am pleased to find out that they had not bothered to raise me from my slumbers. My makeshift bed was incredibly warm and comfortable and I suspect that I would have turned their own guns on them if they had tried to make me leave it at that point. 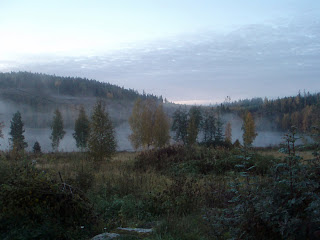 Still, while the rest of the house slumbered, I toddled out to the sauna and washed myself in the water that was still warm from the night before and,after a breakfast of karelian pies, got ready for my big day. 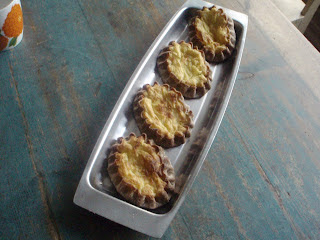 The “big day” as it turned out involved me being deposited back at Pertii’s house to spend the morning with his wife, Kitti, or as she is known by one and all “ The Princessa” 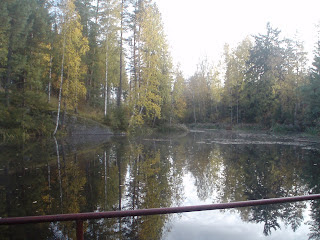 I can, hand on heart, say that The Princessa is one of the most remarkable women I have ever encountered. I got a taster the night before, when we drove Pertii back to his house to find The Princessa and her daughter, Joanna busy preparing some food for a church social. Not, in this case a few sandwiches, but rows upon rows of tarts and pies. 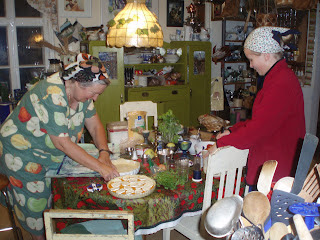 Those of you who have ever read The Darling Buds Of May will know what I mean when I say that Pertii and The Princessa have an element of Ma & Pa Larkin about them, Their house always seems to be filled with people and the incredible smells of Princessa’s cooking seem to permanently fill the air. 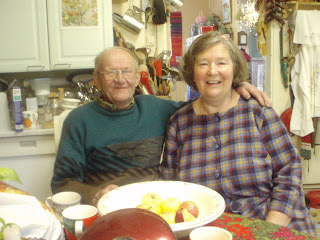 That morning when I arrived, she was already hard at work preparing for a Sunday meal to which eleven or so people had been invited. First though, a little tour of their house, which, again, is like something out of a storybook with every nook and every cranny filled with stuff that she has collected. She looked shamefaced when she admitted to being a bit of a hoarder, but their home is a magical place with books tumbling from shelves and knick knacks littering every spare inch of mantelpiece. 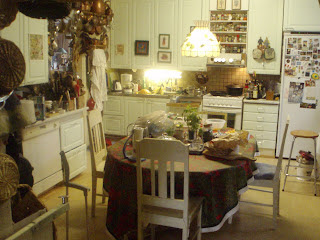 The cellar in particular was a wonder to behold. Fileld with jar upon jar of cordials, jams and chutneys joined by birds hanging in one corner and spare pots and pans in another. 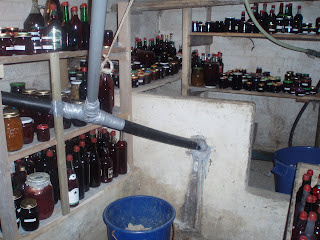 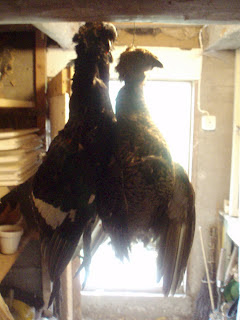 The Princessa is as close to perpetual motion as I have ever met and, as we talked she cooked. She ,of course, gave me something to eat and some fresh ginger and rhubarb juice that she had made that morning.

First we talked about the wild ducks that she was going to cook for lunch. Pertii took me outside to help him singe the last of the feathers off them before The Princessa stuffed them with apples, and browned them in a little butter before adding in a little stock and cream and allowing them to cook slowly. 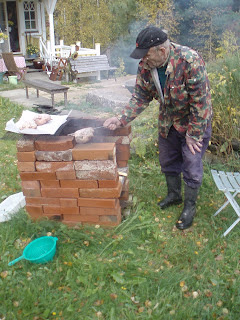 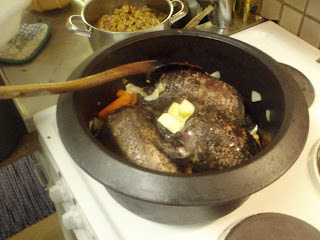 Then we turned to the mushrooms which she was going to produce in three ways, pickled, in a salad with apples, cream and onions and cooked in cream as we had eaten the night before.

At this point, she was going to get really busy, so I left her to her own devices and headed out with Pertii and the Rydman’s who had joined us by now, to go and do a bit more foraging on the hills adjacent to the farm. I have to admit to doing precious little foraging and much eating of the lygon berries that were strewn everywhere. Amazing little things, tart but delicious and holding a special place in the hearts of the fins because of the part they played in keeping people alive in times of post war famine.

The laws in Finland, or at least this part, say that anyone is allowed to forage on any piece of land within a certain distance of the owners property. You need permission to hunt, but otherwise, it is open house.

A few buckets full of precious fungi and berries later and we headed back the house where dinner was about to be served. First, however, Pertii, as head of the household gave a speech in the form of an extract from a book. I did not understand a word, of course, but was told that he spoke about the respect man should have for the land that provides his food. Hats off to that is all I can say. 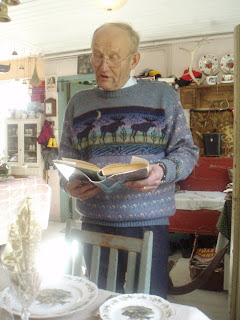 And, hats off to The Princessa who proceeded to fill a table with food until, I am pretty sure, I could see it sagging under the weight of the ducks, the mushrooms (three ways remember, there will be a test later) salads, a carpaccio made of elk, poached fish and home made breads. 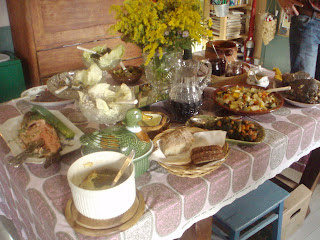 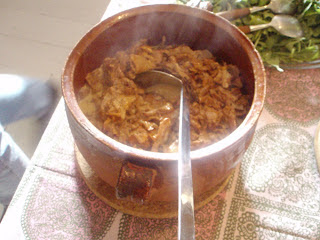 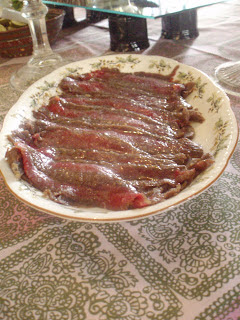 In a traditional manner, we went with separate plates, first for fish dishes and then for meat.

It was all good. In fact, it was all wonderously tasty and I went back to the table more times than good manners dictated, but I didn’t care. This was the kind of meal you did not think existed anymore. Food that tasted like it was meant to.

A prime example was a bowl of potatoes. Martina had told me these were good, but she was being too modest by far. These are easily the best potatoes I have ever eaten, small and sweet needing nothing on them at all. No salt, no butter, nothing. I ate well over twenty of them and kept sneaking back to get another finally popping the last one into my mouth as I helped clear up.

After the meal, we retired to the drawing room and had tea with the merest slice of apple tart to keep the hunger pangs at bay. 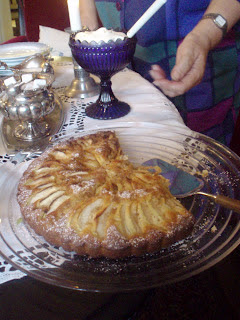 By now it was late afternoon and it was time for people to head home including Henry and Niko who had to head back to the city.

That left me alone with Maija and Paola which was just fine by me and didn’t seem to phase them too unduly.

We returned to their own house where I was given orders to get the sauna going so I could take first dibs before they did.

I sat on my own in the increasing heat as I fuelled the furnace and took the time to ponder on what had happened on the journey so far. It had been an incredible experience and I had met some incredible people who had displayed astonishing hospitality.

But, I can truly say, that I have never met two people like Pertii and The Princessa before.

And, on that note, I headed off to my deep, comfortable couch to sleep the sleep of the righteous. I am not ashamed to admit, I dreamed of potatoes.
Posted by Hermano 2 at 4:56 PM