FINALLY FINLAND: WITH A LITTLE ELK FROM MY FRIENDS
I did not really have time to think about the fact that I would probably never set eyes on most of my travelling companions ever again. With hindsight, I am sure some of them will be absolutely thrilled with that arrangement.

I had to be up at 5.30 the next morning to catch my train across the border from Russia to Finland.

I had my ticket, at last and, after a brief cab ride, found myself on my own in a first class compartment for the easy peasy five hour train ride.

Border crossing was a cinch and, after the oddities of border crossing in China, Mongolia and Russia, just waving my EU passport at the Finnish immigration officer was a breath of fresh air. A sort of "welcome back to Europe" if you will.

I passed the time by watching a couple of movies on my computer and, by the time and aging Bruce Willis had saved the world once again, it was time for me to get off and meet my latest new chums. 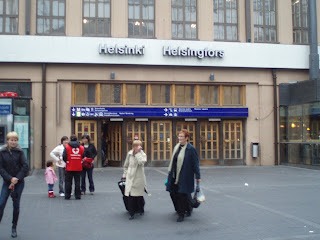 It may surprise a lot of people, given my ability to annoy, that I do actually have some people in this life who profess a certain level of affection for me. One of them is my rather splendid Finnish friend, Martina Rydman whom I met when I pointed out to her that coming into the gym and doing bugger all every day was a total waste of time.

Despite that unlikely beginning, she has become one of my closest, if most annoying, friends and was determined that I head to Finland when I announced plans for EAT MY GLOBE.

So, she recruited her poor unsuspecting family too and, there I was, standing outside Helsinki station in the pouring rain trying to find her sister, Paola.

Despite the fact that most of Helsinki’s streets had been closed down for some international “no car” day, the ever determined Paola had managed to get close enough for me to lug “Big Red” over to her car and get out of the rain before I was totally drenched.

A quick detour to my hostel to check in and drop off my luggage and we were soon speeding up on Finland’s almost deserted motorways towards the Rydman’s splendid little country pile about one hundred and forty miles to the north of the capital. 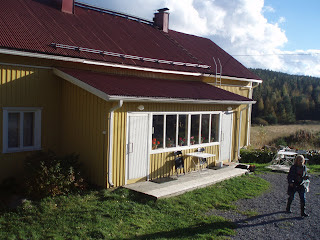 Unsurprisingly, I was pretty exhausted by this stage, but was perked up immeasurably by the smells of pea and ham soup bubbling agreeably on the hob and within about two minutes, I was made to feel entirely one of the family and was headfirst into my second bowl of very necessary pottage. 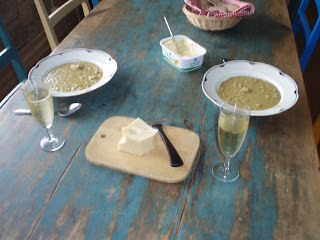 I could, by this point, easily have slept until my name was changed by deed poll to Rip Van Majumdar, but the Rydman’s had other plans for me.

Plans which included me putting on a pair of Wellington boots. Now, I am not sure about you, but I don’t have much call to ever put on a pair of wellies and certainly can’t think of a reason why I would own any. The Rydman’s have hundreds of pairs and I was soon standing outside the house, resplendent in a borrowed thick sweater, thick Finnish walking socks and the aforementioned gumboots. Personally, I think I looked a bit simple, but they all made sympathetic noises at my obvious discomfort. 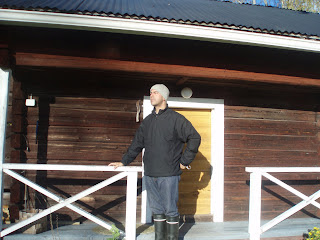 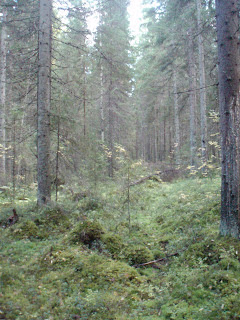 The reasons for my new found use of rubber were two fold. First of all, we were about to head into the woods near their house to go in search of the wild mushrooms which proved to be so much of a staple in the local diet and, secondly, and even more fun for me, we were about to go hunting.

In my original plans, I had wanted to join the locals during the elk hunting season. A season, during which, I was told, they kill over 50,000 of the massive beasts. But, by a disagreeable twist of fate, the short season for this happened to coincide with my trip to Kansas city for the American Royal BBQ competition where just about as many animals would be cooked.

So, I had to settle for wild duck hunting which was just fine by me. 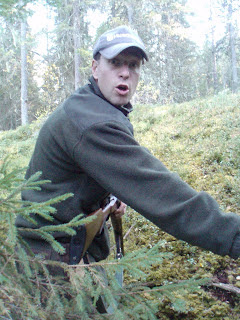 Not everybody thinks that hunting is “just fine” and I can certainly understand why. In the UK, much of the shooting I have encountered is the sterile execution of thousands of birds for sport with precious few of them ending up in anybody’s stomach. I would be as anti that as anybody. If all you want is a target, then shoot clays, not something which had a mom and a pop.

On the other hand, the hunting in Finland is quite different. Here, they shoot to kill and kill to eat. Wild birds, elk, deer, rabbit are all, er, fair game and all for the pot. I don’t have and never will have a problem with that. It would be slightly disingenuous given how much I like to eat the end result.

But first, the altogether less controversial matter of foraging for mushrooms and berries as we spent a good hour rummaging around on the forest floor looking for clumps of the incredible wild chanterelles and lygonberries. 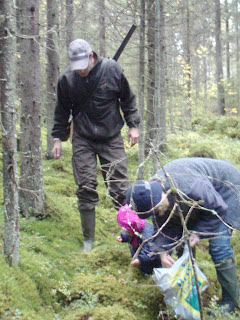 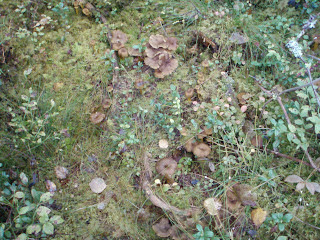 We soon had buckets of the mushrooms which Maija, Martina’s mother had promised to cook up for us that evening. I could hardly wait, but it was, by now time for me to go off with Henry and chum, Niko and to meet Pertii.

Pertii is one of those men who you didn’t believe existed anymore. Literally, King of the Hill, he owned the over 125 hectares of land on which we were foraging and has been living off the abundance of the land for most of his nearly seventy five years.

We split into groups, Niko and Pertii went off in one direction and I followed Henry in another. I think we got the bum deal. I stood a respectful distance, as I always tend to from people with guns and Henry set himself up and made like a wild duck with a little kazoo type thing designed just for that purpose. 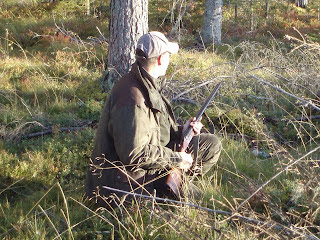 As the sun began to fall, it got progressively colder and I became progressively more grateful for the warm clothes I had borrowed.

We, much to Henry’s disgust, caught nothing, not even a cold. But, as I came closer to him ( after he had broken his gun, of course) he said

“the others got a couple”

How did he know? I pondered on some instinctive method of communication that men of the woods have developed after being in these environs for so long. Or, perhaps it was a calling system developed for the purpose handed down from generation to generation.

“oh no” Henry explained, digging out his Nokia “Niko just texted me". So there you go. Doh.

And, Niko and Pertii had indeed bagged a couple of beauties which would be ready for the pot after a couple of day’s hanging. 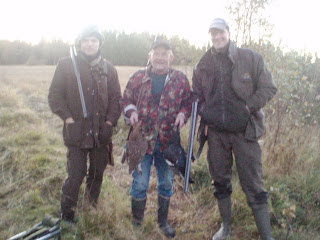 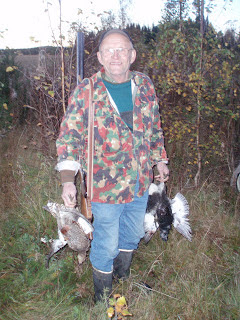 By now, it was pitch black so, after dropping Pertii back at his farm (more of this in the next post) we headed back to our own place to indulge in two more Finnish traditions.

First up, a sauna. Much like the one in Lake Baikal in Russia, this involved stripping down, sitting in an increasingly hot room for about half an hour and then throwing oneself in the nearby lake. Despite the fact that the temperature of the water had dropped to “for fuck’s sake” levels, it was a great way to clean up after the day and I was, by this time, starving.

So, when I saw Niko and Henry nailing a bit of fish to a plank of wood, I was intrigued to say the least.

Loimu, is, apparently a traditional Finnish dish made from, well you heard me, nailing a bit of fish to a bit of wood and dangling it over a fire. 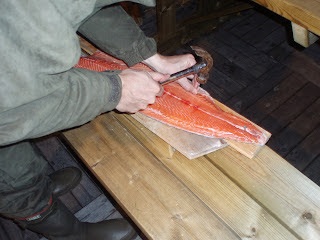 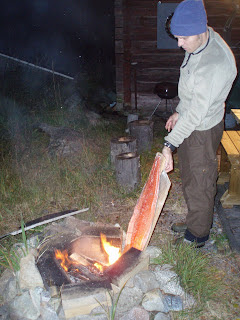 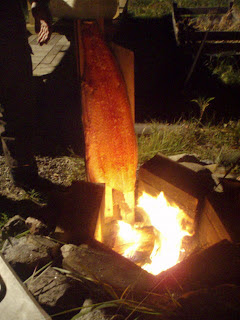 It doesn’t sound so promising, but, when you have fish of the quality of the salmon being prepared and the glowing embers of a fire, the results can only be good and they were. The fish cooked through in the residual heat of the dying fire until it is medium which leaves it juicy and brings out all those bubbly salmon oils that are suipposed to do us so much good. 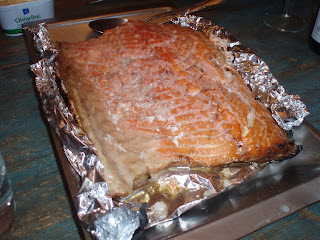 With a big pot of those mushrooms cooked down in cream and a local beer, it was the perfect meal and the perfect end to a day that I had been looking forward to for a long time. I kept on telling myself there had to be a good reason I knew Martina and, here it was. 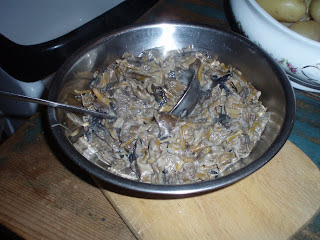 The house was full, so my resting place had been made up on a large and deeply luxurious couch. It too was perfect and, as soon as my head………… Well you can guess the rest.
Posted by Hermano 2 at 2:37 AM