BERKELEY: FROM FRUIT BOMBS TO RESTAURANT BOMBS
If Santa Cruz is full of loveable weirdos, then Berkeley is what happens to weirdos when they make lots of money and settle down.

Everything in Berkeley looks perfect. Oh, it has its dark side, I am sure, but it looks perfect. The streets are filled with achingly styled shops and the people look no less designed. It has a kind of “Stepford Wives” quality about it.

I wanted to like it, particularly as it is the lifetime home of my new chum, Alexandra Eisler and her charming family, but if I am honest, I found precious little to warm to in this town which reeks of the neutering which happens when radicalism is bought off with cash and security.

“All fur coat and no knickers”

I managed not to hit anything on my journey up from Santa Cruz, which was a bonus and soon pulled into my last port of call, a traditional style place that reminded me of the motel in Psycho.

It was, as so many places have been on this trip, basic but clean and would suit its purpose of giving me somewhere to rest my head and full belly down perfectly and at a price that would not bankrupt me.

Alexandra had arranged some fun stuff for my time in town and my first task when I arrived was to head off in search of cheese, my contribution to a picnic then next day at the Hendry Ranch winery.

Now, as I have said on many occasions, The USA is the place where good cheese goes to die. So, I had little optimism that I was to going to find anything worthwhile a feeling that was added to when I found that the one store Alexandra had recommended was closed.

I began to walk around town in a vain search for cheese and came across the farmers market where there were two (I think) stalls selling locally made cheese. Neither looked that great but, needs must etc etc, so I went to try some samples. I was right, neither was great, but one would do at a pinch so I bought a round.

You would have thought that I had asked if I fondle the stall holder’s wife’s tits rather than offer him money for a cheese that would not be used as cow fodder in France or the UK. The sour look on his face is probably what he uses to turn the milk to make his shitty cheese. $10 for lousy cheese and service with a sneer. God Bless America.

He was not alone though. As I walked around looking at the other stalls, I saw not one smile from the stallholders. Not one. It was as if this was a black hole where all good humour was sucked up. I began to realise that this is why I am really beginning to fucking loathe farmer’s markets.

I managed to supplement this “cheese” with some better examples I found at an over priced foodstore on 4th St and headed back to my motel with just a stop at Fosters Hot Dog Stand to keep me going. 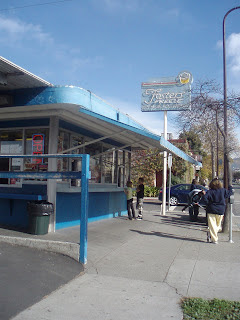 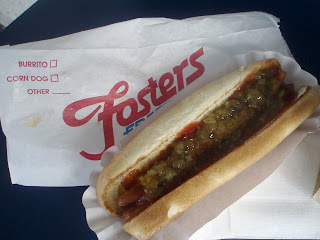 The next day, Alexandra collected me as promised and, after a brief stop at The Acme Bread Company, 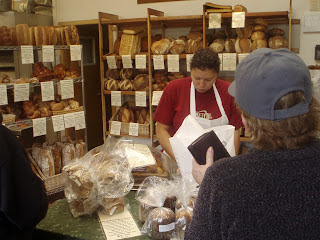 we headed out with Tim, her hubby and Carson her charming daughter to Hendry Ranch Winery up in The Napa Valley. 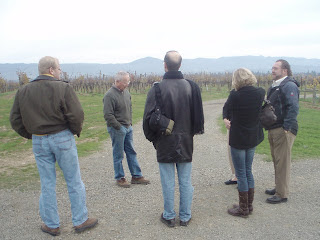 With a few others, Tim and Alexandra buy grapes here and make their own wines. Wines which I was to try later. So, Dr Hendry had agreed to let a few people visit and give us a tour of his impressive winery.

It is quite a place and he is quite a person. A quiet but very heartfelt winemaker who takes the whole business of wines incredibly seriously. Each point of the farm is mapped out not just with variety of grapes but also with clonal types and root stocks. It is little wonder that Hendry was one of the suppliers of grapes for the legendary Californian wine, Opus One. 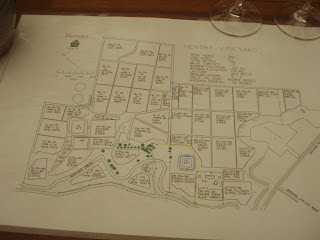 Dr Hendry, who in his life away from the winery was a creator of electron accelerators, was incredibly welcoming and hospitable and, after our informative tour, he joined us for our picnic and opened a number of bottles for us to sample. 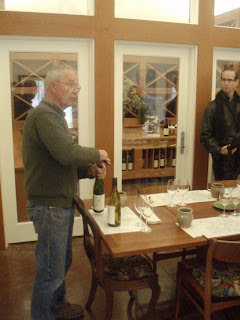 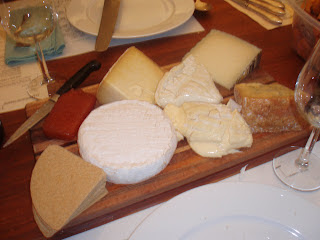 The wines seemed to be the opposite of their maker. Where he is quite and soft spoken, these, like so many Californian wines, were loud and shouty. It boils down to taste and these wines were certainly better than some of the reprehensible fruit bombs I have tried from The Napa, but they were still too big for my distinctly European tastes with the high alcohol content swamping the palate.

The others in the party, more used to such big tastes were much more at home and bought cases to take away. Although, I am still a fan of many New World wines, my preference for the dignity of Old world wine making remains. Hey, it’s my story, I don’t have to be consistent.

On the way home, we made a stop to visit another local Napa legend, Rancho Gordo AKA, Steve Sando. Famous (infamous) on food boards everywhere, 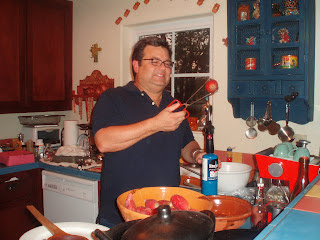 Steve has carved a niche for himself selling a vast range of heirloom beans to foodies across the USA. I have sampled his wares at dinner parties given by friends in the USA, but had never encountered the man myself. So, it was a welcome opportunity to finally put a face to a name. He was in the middle of preparing supper, so our stay was a short one as he offered us prickly pear juice laced with tequila to warm us back to Berkeley. 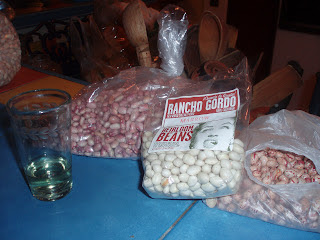 My final day in Berkeley was also my final day of this leg of EAT MY GLOBE. A leg that had taken in four countries including THE USA, nearly twenty cities and some experiences that it would not be inappropriate to describe as ‘magical” I had made some new friends along the way. Friends who, I am sure I shall know for a long time. I had tried foods that were entirely new to me, the initial point of the trip and I had experienced some lows and some exhilarating highs.

It seemed fitting then that I finish the trip by visiting one of America’s truly iconic restaurants, Chez Panisse where, thanks once again to the generosity of Alexandra, I had managed to get a reservation.

Across from my motel was Café Fanny, also part of the same group as CP. I wandered across for a breakfast of hot chocolate and a muffin. It should have been a sign of things to come. The place looked wonderful, of course and so did the food. It tasted dreadful however. A triumph of style over substance. 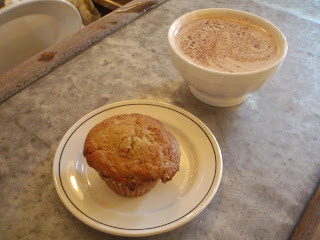 Before supper, however, I was invited over to join Alexandra and her family for a pre-supper, supper of freshly caught crab from Northern California. I had to work for my pre-supper supper though and spent a good hour or so filling tasting pots with the jams and marmalades that are part of Alexandra’s new-ish enterprise, The Kensington Marmalade Company before I got near a crab. It was worth the wait. The crab was stunning and made what was to follow all the more disappointing. 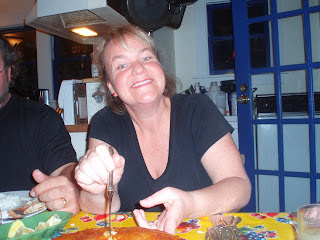 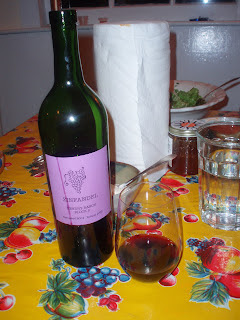 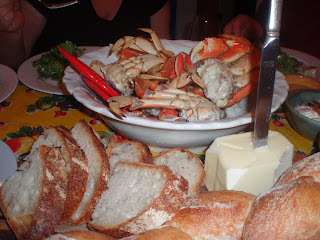 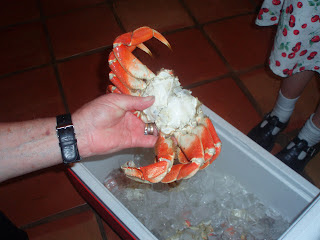 Well, let’s be honest. The meal at Chez P was not disappointing. It was iniquitously bad. New words will have to be invented to describe the awfulness of my meal. A shame as one of the pastry chefs, Samantha Wood, had been kind enough to give me a tour of the impressive kitchens earlier in the day. It was also a shame because I was sharing supper with two more local food board regulars, Carolyn and Tamar who had to suffer the tirade of abuse I hurled as each course came out. 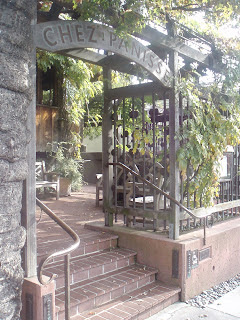 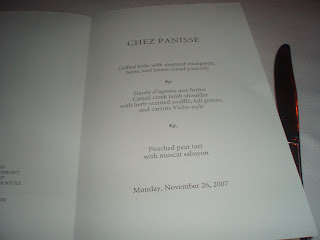 An insipid starter was followed by a main course which could used in a court of law to stop Americans ever, ever going near a piece of lamb again. 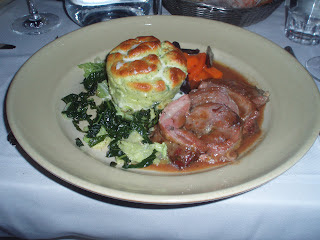 There was a cheese board that would have made Randolph shake his head in disbelief and a dessert where the filling of a tart tried to make its escape from a rock hard pastry base by sliding off. 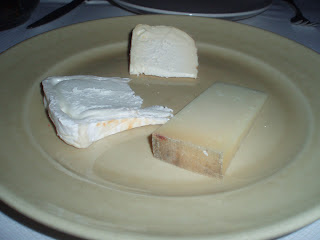 But, what the hell. It was only one meal amongst hundreds that had passed my lips on this part of the adventure. And what meals they were. BBQ in Kansas, Hot Dogs at Hot Doug’s, Tex Mex and BBQ in Austin, Po Boys in New Orleans and cheese steaks in Philly. Pulled Pork in NYC and tripe tacos in Mexico, Bife in Argentina and Moqueca in Brazil. Thanksgiving turkey in Santa Cruz and fresh crabs in California.

My mum always used to tell me I was a lucky little boy.

She was right. I am a very lucky boy indeed

The journey continues
Posted by Hermano 2 at 10:39 PM

Wow, what a poor showing from Berkley. Then again, being from the South Bay, and much prefering Santa Cruz, I'm not all that surprised.

The farmer's market thing does surprsie me though; I love the ones here in DC. Despite the cold and rain yesterday, I was able to sample some terrific food and while the good veggies are nowhere near ready, everything was served with a smile and helpful suggestions if I didn't know what to do with something that looked interesting but hadn't used before.

Thank God for Aunt Lonne and Uncle Tom (and their Dungeoness crab connection) rescuing your last day here! Next time, try the Kensington Farmer's Market, where everyone smiles...

I want to meet Alexandra, too!

You made me laugh, once again. Fanx.