ISLAY: THREE MEN AND A STILL 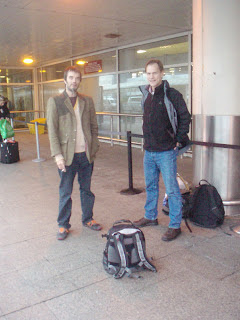 If you have been reading the blog from the start, you will know that one of my first forays into the world of food and drink on this trip was to meet with the estimable John Glaser of Compass Box Whisky.

He was good enough to spend a whole day with me at the very start explaining all about the processes of making whisky(”good whisky is like good pornography. They both need good wood”) and about his own maverick but highly regarded company specialising in blended and pure malts.

So, fired up by that, I decided that I was going to spend some time between longer foreign journeys and head up to Scotland to see where the sauce is made at the source.

John made a few suggestions and put me in touch with Kilchoman, a new distillery on Islay. There first releases would not be until 2010, but the new spirit, fresh off the stills was already getting good reviews and augured well for the future.

They were incredibly responsive and, before long, I had arranged to go and spend a week with their master distiller, Malcolm Rennie seeing what happened when. Most of the work would be done in the morning which also gave me ample time to visit as many of the eight other distillers on the island as possible.

It sounded perfect. Islay whiskies have always been my favourite with their unmistakable smells of smoke and peat.

It also sounded perfect to John because, once I told him that I was on my way, he managed to sculpt some time from his hectic schedule and agreed to join me for my week’s stay. It was just getting better and better. Not only was I going to be on Islay, home of my favourite whiskies, I was going to be joined by one of the most respected men in the whole industry. A double bonus.

Another bonus came when John, in an act of extraordinary generosity which I soon found out was not isolated, agreed to cover the costs for the whole shebang. Even when the mad, bad and dangerous to know, Mr Nick Strangeway, cocktail maker extraordinaire got wind of the trip and made us a party of three.

The flights were relatively painless. From London to Glasgow and from there, by a small propeller driven plane, to Islay’s tiny airfield and, by early evening we were settled in our waterside guesthouse and having the first of many tastings at the nearest bar which, inevitably had one of the biggest collections of Whisky I have ever seen. 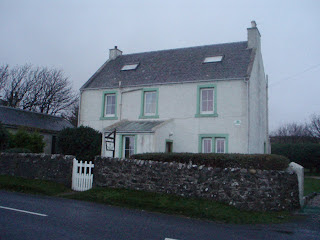 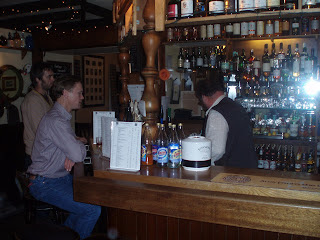 Well rested and plumped up by an excellent in heart attack inducing breakfast the next morning, we made our way the few short miles to Kilchoman (pronounced Kil-Ho-Man) for our first days work. 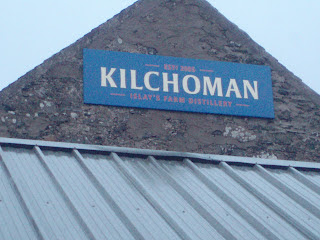 Malcolm Rennie and his colleague, Gavin have both been in the business a long time and were already working the morning distillation with the sort of quiet professionalism that comes from twenty years in the business. They were also indulging in a constant stream of affectionate bickering, more akin to an old married couple than colleagues. All very funny and which continued over a welcome cup of strong tea as they told us what our tasks would be for the next week. 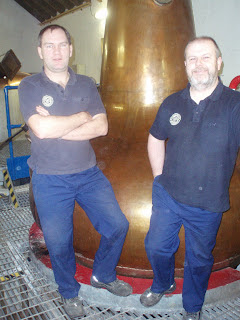 First up a tour of Kilchoman’s small but perfectly formed facilities. The malting floor (Kilchoman being one of the few that grows its own barley and floor malts rather than buying in malted barley which the larger distilleries are forced to do) then the mash tums where the heated malts are turned to a beer called wash and then the stills themselves where, as all Scotch Whisky is, the wash is distilled once and then the resulting spirits are distilled again to give the clear liquid that becomes the amber beauty of Scotch after aging in the barrels. 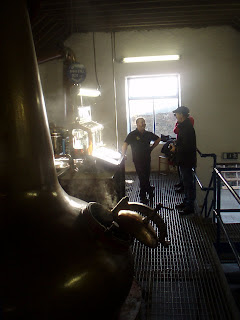 Then a trip to the warehouse to see the first barrels of what will become Kilchoman’s first release in 2011. The New Spirit, that is the spirit given up after second distillation is already being released in small sample bottles and augurs well for the future. There are already the signs of a Scotch that will age incredibly well in the barrel and Malcolm, with all his experience, was quietly pleased as the knowledgeable amongst us ( that will be John and Nick) made all the right noises. 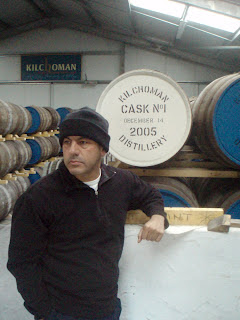 Over the next few days they put us to work. First of all turning the malt on the floor by hand to make sure that all parts of the barley heated through at the same time. Next, shovelling through to the wash and the mash tuns so it could brew and finally, measuring the “Faints” and “stills” of the first and second distillations. 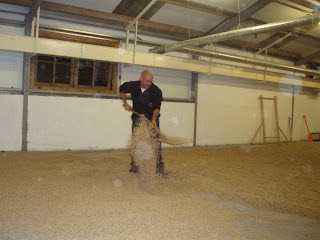 Fortunately, most of the main work takes place in the morning which meant that each afternoon we were able to head off and visit six of the seven other distilleries on the island. John Glaser, before starting his own company was a honcho at Diagio who own most of the distilleries on Islay. Because of that and because of Nick’s own connections, our visits to the distilleries were far more than just the normal tour guides. In most cases we were shown around by the master distillers and then treated to tastes of some very special whiskies indeed. From a 12 year old of the very best distillations from Bowmore to a 21 year old from Lagavulin aged solely in Sherry casks. 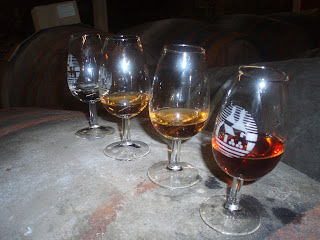 My own favourite was from Caol Isla, for so long known as one of the producers of single malts for Johnny Walker, but now producing very fine single malts under its own name 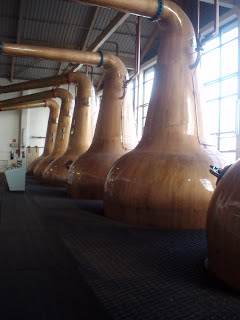 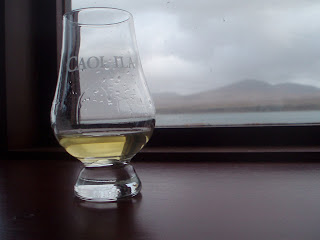 In more recent times, because Bourbon barrels can only be used once for their original purpose, the old barrels have been sent to Scotland to contain Scotch. However, in times past, the barrel of choice was a Sherry barrel and some limited editions are still made in this way which gives the end result a rich, dark, amber hue and a definite hint of matters Jerez to the palate and nose.

The “cheats” way is to age the whisky in the normal oak and then move it for the last eighteen months or so to a sherry barrel to give a similar result in a process called ‘finishing” However, the end result is not the same. The final product tastes like two whiskies grafted on to one another not a smooth drink from first sniff to final taste.

However, if “finishing” is not always the best aesthetically, it is certainly good for business as the re-invigorated distillery of Bruichladdich has proved.

When Mark Reyneier bought the distillery a few years back, he bought with it significant amounts of stock. Given that he would not be able to get a return on his investment from new distillation for at least five years, he had to make the most of these existing stocks.

Using his experience in the wine trade, he decided not to go down the route of releasing the standard 10, 12 and 21 year olds but instead to create a marketing drive based on limited releases of whisky finished in a huge variety of barrels ranging from La Tour to D’yquem. The result has taken the whisky world by storm for good and for bad. 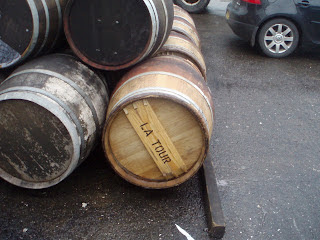 The collector of Scotch, or The Malt Maniacs, have been snatching up every new release so quickly that each bottle is soon worth double or triple its original asking price soon after release. That is if you can get a hold of it. 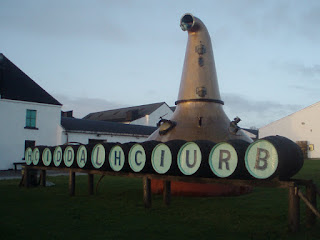 The Scotch Whisky Society seem much less impressed and Mark it seems spends much of his time constantly locking horns with them as he butts against what is allowed.

I was not wowed by all the Bruichladdich whisky I tried, which suffered much of the layering effect other ‘finished” whisky are limited by, but you cannot help but be impressed by a man who has single handed turned a whole industry on its head.

Talking of things turning, let’s move on to my stomach.

Amongst all the distillery visits, I was keen to take John and Nick out to see some of the other food on offer on Islay. Very little of it is available in the restaurants and hotels of the area. In fact much of the food on the island is pretty dire. The good ingredients all get exported to the mainland and to Europe where they fetch a pretty penny because of their quality.

So, if we could not eat them on the island, we could at least go and visit them at source. One such place was the Islay Oyster Company. 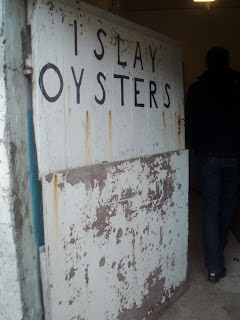 Now, I like Oysters, but after a bad one some ten years ago at The Frankfurt Book Fair, they hate me.

Nick, however, has a cast iron stomach for things in shell and within minutes of us arriving at The Islay Oyster Company, he was scarfing them down like a good un. I look on enviously until I could stand no more. I am not sure what made me do it, perhaps it was Nick going “go one try one. You will never get a fresher one” and, he was right of course, these were plucked straight out of the water. 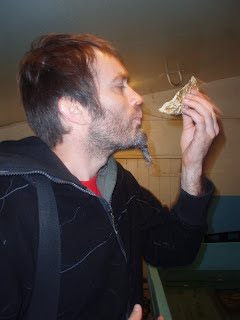 So, casting caution to the wind, I sucked one down. It was good, meaty and plump and I felt just fine. That is, of course until four hours later as we were walking through the cellars of Bowmore and I began to come over all queasy.

They guys rushed me back to the B&B with a few stops for projectile vomiting and I tried to sleep it off. I failed and, at about 6am the next morning, the locals were treated to the sight of me sitting in the tiny A&E department of Islay’s equally tiny hospital, which we had found with the help of an early rising local.

After having a nice lady Dr tell me “it’s probably best if you keep away from Oysters” I returned home to bed while John and Nick went to see the last two distilleries, Ardbheg and the famous, Laphroig. When they returned, they were full of the joys of the beauty of the place and the drams they had been offered. Yippee for them.

Fortunately, both being excellent sorts, they insisted we go back the next day so I could see and taste what we had missed. Not before a final visit to the Kilchoman Distillery to say goodbye to Gavin and Malcolm who, bickering as usual, proved the point that, on a tiny island like Islay, everybody knows everybody else.

“you were ill yesterday, were you not?” said Gavin

“and you had to the hospital, did you not?” he added

And with that, we said our goodbyes and left them to argue about who was making the next cup of tea as we headed off to see the final two distilleries 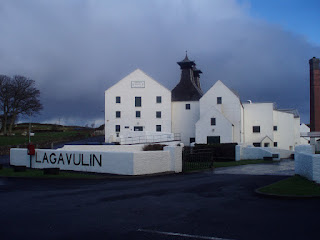 If there are two companies more beautifully situated than Ardbeg and Laphroig, then I would love to see them. Nestling on the banks of the chopping sea, with the Sun cutting through the chill, it was hard to imagine that I was actually here, on Islay and had spent a week, apart from the time I spent throwing up of course, making a brand new whisky. 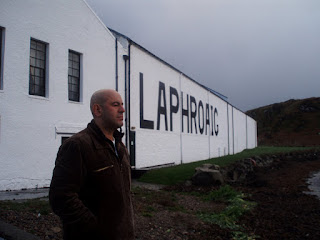 There are not too many people I know who can say that. Apart from John and Nick, of course. The other two involed in " Three Men & a Still"
Posted by Hermano 2 at 9:42 AM