THAILAND: COOL SWEET IN BANGKOK
I can say at the very beginning that Thailand ranks in the very highest echelons of my trip both for the food and the people.

Mind you, it didn’t look that hopeful to begin with.

My flight over from London via Doha was blighted on both legs by screaming children. My malaria tablets had kicked in and made me feel like a pregnant woman with morning sickness and I spent much of the flight going to puke up and to top it all off, when I arrived at Bangkok airport, there was a hideous wait for my bags, for immigration and for a taxi.

Not a good start.

Things got better when I arrived at my small guesthouse, however and, after a warm welcome, I was able to go straight to my room, shower and head out to explore the local neighbourhood of Sukhumvit. 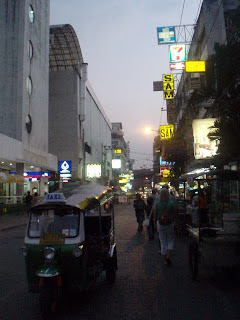 More by luck that judgement, it would appear that I had chosen well. It is a pleasant neighbourhood and my accommodation was within a pineapple’s throw of the nearest station of the efficient Sky Train.

Within about an hour of arriving, I was already face down in my first meal, a simple bowl of fried rice prepared at a local street stall. One bite and I knew that I was going to enjoy my time in Thailand. Cooked in front of me, served with a hint of a smile and entirely delicious. Add to that the fact that the cost was less than the price of a daily newspaper back in London and I walked away with smug mode fully engaged. 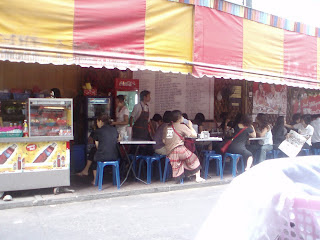 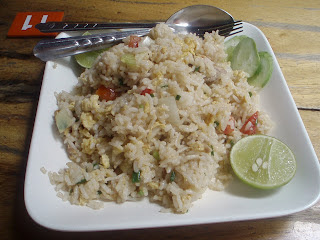 The jet lag had kicked in by now, so I headed back to my guesthouse and fitted in a few hours sleep before smartening myself up for a visit to a well-known local restaurant, Ban Kanitha, which had been recommended to me by a friend who had lived in Bangkok for many years. 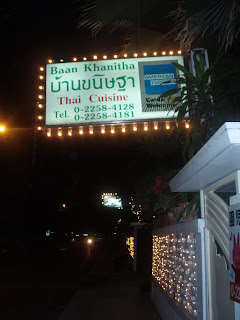 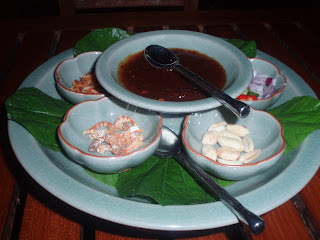 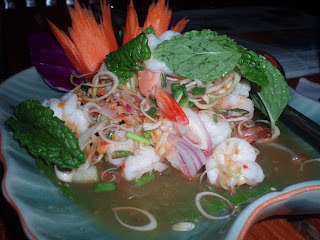 I was slightly dispirited to see, when I arrived, that the only other people in the place were a couple of loud British businessmen who were squealing at high volume to the manager

He of course, smiled sweetly in return, despite their horrific behaviour and turned to me with a menu. It wasn’t cheap, this being a place I suspect is predicated on feeding the large ex-pat community, which congregates in this part of Bangkok. But, as a first experience of Thai food in Thailand, I was pleased with what was served. A shrimp salad was sharp, fresh and fiery, soft shell crab had a pleasing crunch and the shrimp cakes came with a sauce whose sweet, sour taste was unmistakably Thai. 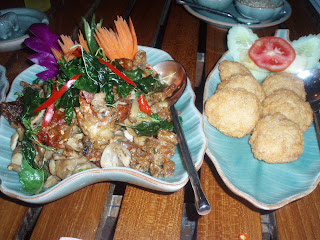 With a couple of cold beers, it was enough to send me off to an early night and thoughts of the next four months on the road.

The following morning, jet lag kicked in once again, and I was up and about at 5am. I took the all too rare opportunity to catch up on some writing before heading out to visit one of Bangkok’s famous markets. In this case, The Chatachuk Market, about a half hours ride North on the Sky Train.

By the time I arrived at 8.30am, it was already well underway and the small spaces of its crowded passageways were already crowded with weekend shoppers. It’s a great market, one of the best with just about everything on sale you could imagine. 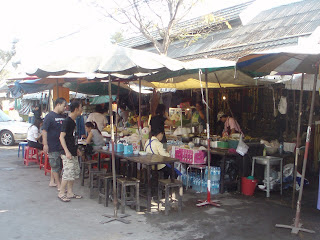 I can’t think of too many markets where shops selling puppies, being blow dried to fluffy cuteness in preparation for the arrival of potential new owners, could sit next to shops where live chickens were being killed, gutted and fried, in preparation of the arrival of, well, me. 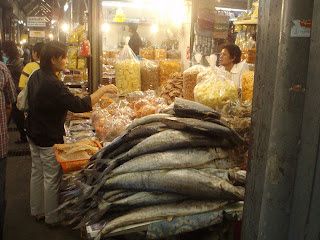 This being Thailand, there is food, of course there is food. There is food everywhere. The people are obsessed with it and, after a starter snack of a couple of passable spring rolls, my nostrils were attracted by the smell of that chicken frying. I stopped at a small stall where the chicken seemed to be the major thing on offer and ordered a sizable portion to work my way through. 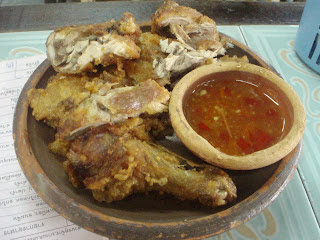 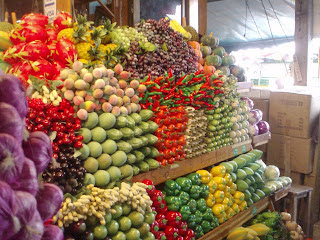 What can I tell you? I am a sucker for good fried chicken at the best of times, but this was right up there. Serious stuff and served with a seriously spicy sauce that needed washing down with the fresh fruit drinks being made at the next stall. If I close my eyes, I can taste it now. I gnawed on it until the bones were sawdust, which received a reward in the form of a smile from the owner as I paid her whatever small pittance it cost.

The humidity, by now, was stultifying and I was pleased to climb back on board the air conditioned Sky Train and head back to my guesthouse for a nap. I was obviously exhausted, because by the time I awoke, it was dark outside and I realised I had been asleep for about six hours.

Still, I managed to drag myself bleary eyed into the shower and woke up enough to head out to the Suan Lum night market where, I had been told, they had an excellent open air food court. 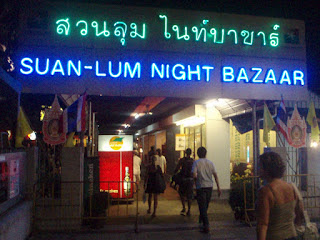 I am told that it is under threat of closure, which is a great shame because both the market and the food court are a great deal of fun. After a stroll around the shops of the market, most specialising in traditional Thai handicrafts, I headed to the food court, which was set up so you bought pre-paid vouchers which could be exchanged for food and drinks at any of the many stalls set up around an area of seating the size of a football field.

The first odd sight was of young Thai women dressed in traditional German outfits. I had not long returned from Munich and thought for a moment that my malaria tablets (also prescribed for dealing with cases of the clap, thanks for telling me Dr Patel!) had caused hallucinations. However, it transpired that, as everywhere, the German brewers had been there first and one of the biggest beer stands was Pauliner.

The second odd sight was the seeing a large TV screen showing Wigan Athletic Vs Bolton Wanderers to a less than rapt audience of bemused Thai families. The English Premiership is incredibly popular all over the world, but I think they might have been hoping for Liverpool, Manchester Utd or Chelsea rather than a couple of bottom table, Lancastrian strugglers. 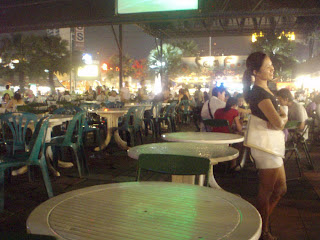 Still, everyone seemed to be having a damn good time and I joined in with a big bowl of Green chicken curry and sat down to watch the game. To be honest, it had the same effect on me as it would have done had I been back in the UK, it drove me home to bed. 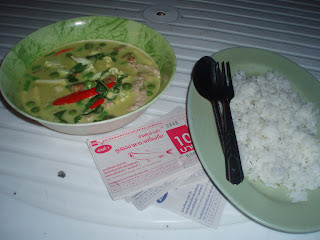 It is fair to say, I was enjoying my early experiences of Thailand. Particularly as I had no idea what to expect before I got there. However, on the walk home, I took a detour through one on Bangkok’s infamous streets of girly bars, Soi Cowboy and, I have to admit to almost bringing my supper back up at the sight of fat, old and ugly European men (mostly German and Dutch it appeared) groping girls young enough to be their daughters and certainly not looking as if they wanted to be groped by anyone let alone these, corpulent, lecherous Neanderthals. 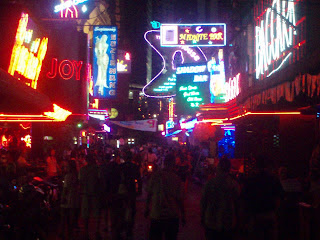 A few of them called out to me

Their lips formed a smile but their eyes were hidden behind bars of being trapped in this vile profession.

It was my first experience of Thailand’s seedier side and it made me as angry as it did nauseous.