THAILAND: COOL SWEET IN BANGKOK
My next couple of days in Bangkok, I concentrated on fitting in a bit of sightseeing, which included, of course, a visit to The Royal Palace.

When I arrived, the place was mobbed and lines of people dressed in black were forming sombre, orderly queues.

I was unsure what was going on. I had no TV and had not had chance to catch up with any news on my P.C. So, I walked to the nearest information booth to be informed that the sister of The King of Thailand had died the day of my arrival.

Princess Galyani Vadhana was 84 and revered in Thailand for her promotion of education and culture amongst other things.

In fact, all of the royal family is treated with extreme deference and honour in Thailand, from simple things like standing for the national anthem before the showing of a movie in the cinema to harsh punishments for signs of disrespect. It is unusual coming from a country where our royal family receive and indeed deserve so little respect, with a few exceptions, to visit a country where they are part of the very fabric of society. 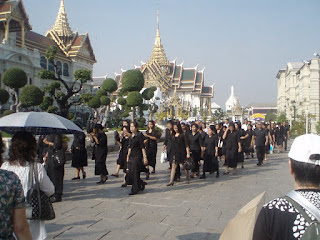 Because of the ceremonies, much of The Royal Palace was closed so, I cut short my time there and headed to visit the legendary Khao San Road, the epicentre of South East Asia’s back packing community. 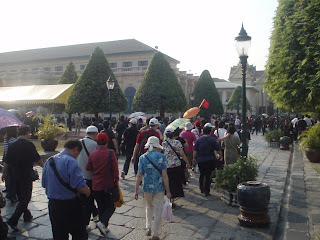 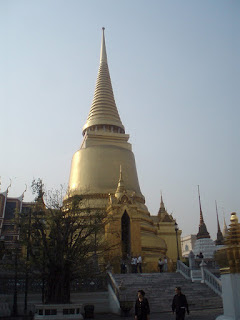 For years, just about every gap year traveler has begun their adventures in this street which became famous when it was featured in the rather drab film of Alex Garland’s equally drab book, The Beach and, unless you are eighteen, there is precious little to recommend anything other than the most hurried passage through an ugly street full of tatty cafes serving banana pancakes and panini to hungry youngsters, 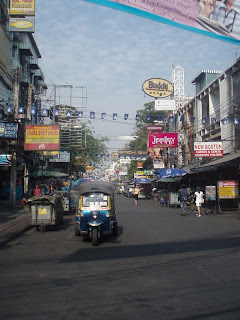 On the most subjective of research methods, most of the kids seemed to be white, middle class and with dreadlock. Many had “gone native” jettisoning their Western clothes on arrival and trading them for the nearest pair of Thai Fishermen’s pants. Quite franlky they look fucking stupid, but hey, I guess it supports the local economy.

I left there about five minutes after I arrived and headed off in the nearest tuk-tuk, in search of some lunch, which I found in the form of some fish ball soup at a small shack in Bangkok’s impressive Chinatown. It was, in the blistering heat and staggering humidity, all I could face before heading back to my humble accommodation and having a much needed kip to prepare me for supper. 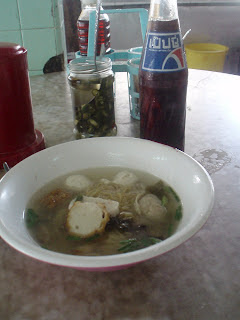 So far, so good. All the food I had eaten from the market and street food snacks to the previous night’s high end meal had been a success, which meant it was time for something to go tits up, which it did with that’s night’s meal at Bussaracum. I had gleaned the recommendation from the Thailand pages on Chowhound, which should have warned. It wasn’t an actively bad meal, just lacking any of the freshness and zing of the previous couple of days. Mee Krob was oily and tasted as if it had been sitting around for a while and a salad of Papaya too tasted tired. The only dish that stayed in the memory for any period of time was a dish with the unlikely name of Nong Gob, a tray of meaty frogs legs covered in a fiery sauce. Those I liked and chewed down to the bone. The rest however was unmemorable and expensive and, while the service was sweet enough, I was in and out in little over an hour, which at least left me time to head down to the river and catch one of the free shuttle busses to the ritzy hotels that line the water and drown my sorrows with a remarkably well made Martini.

If there is one thing I like, it is shopping malls. Don’t ask me why, but I love them and can often be found pottering happily around them in air-conditioned comfort in the heat of the day when I am traveling. 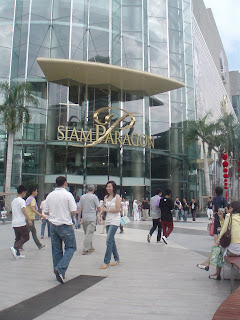 Well, of al the cities I have visited, the ones in Bangkok are at the top of the tree. The enormous Siam Paragon with its Car Dealerships on the third floor to the MBK mall with seven floors of stores all selling excellent knock off gear, that of course, I would never dream of buying. 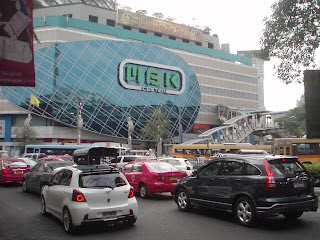 It counter pointed rather well with my afternoon’s journey from modern to ancient as I headed up the river to Wat Pho and to see a splendid Golden Buddha, which seemed to be surrounded by lots of people from South Dakota who were offering useful commentary in a “gee, its big” kind of way. 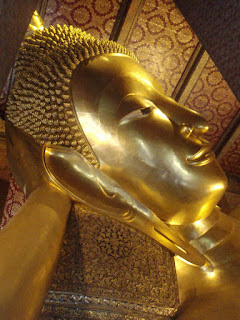 But, after the disappointments of the night before, I wanted a decent meal. It was going to be my last meal in the city and I didn’t want my abiding memory to be of an oily mee krob. Heaven forfend. 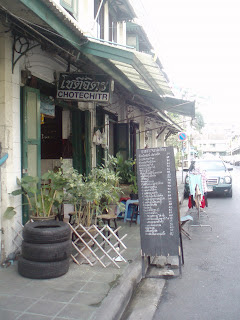 Another recommendation this time turned out to be a real winner. Chote chitr was a tiny, unassuming place with a big reputation. Cuttings from papers local and international covered its small walls. Apart from me, the only other table occupied was by a group of women taking a break from work for lunch and I was quickly ushered to a small table and given a menu. 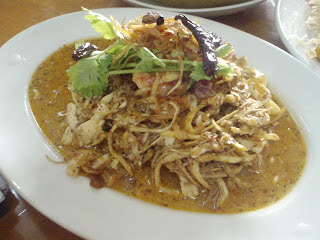 As poor as the meal had been the night before, this meal was as good. The meek rob, well I just had to have that again, was stunning, fresh and crispy with the sourness of tamarind. A salad of banana flower was fresh and had all the pre-requisite sharpness and the green curry’s chilli kick brought tears to my eyes. 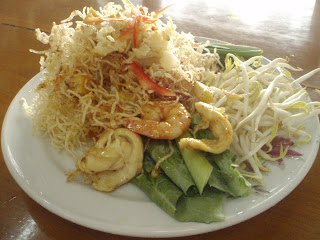 It was just about a perfect meal and a perfect end to my time in this hugely energetic city.

Talking of energetic cities, next stop Kuala Lumpur
Posted by Hermano 2 at 11:49 AM

Thank you for sharing traveling post. I heard that the most famous shopping centre is Siam where has both in-out door shopping centres but i like Jatujak weekend Market more....

I have yet to know someone who hasn't liked frog legs. I call myself a "foodie", but that's quite half-a$$ since I still haven't gathered the courage of eating frogs. Maybe if someone disguised them as chicken lollies!