NEW YORK: DAY TWO
My first day back in New York had been about family.

I had barely left the comfortable surrounds of Sanjoy & Evelyn’s apartment and felt suitably refreshed the next morning as I headed out to visit three places which, to me as a visitor, sum up everything that is special about eating in New York.

Continuing the research into my theory that America’s greatest contribution to world cuisine is the sandwich, I headed down to Houston St and the site of one of the great sandwiches on planet earth, Katz’s Deli. 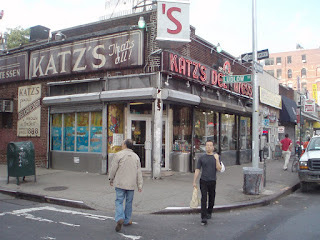 Prone as the people of New York are to hyperbole, it would not be any great surprise if the much lauded pastrami sandwich was good, but not as good as they say. For once, they are absolutely right. It is every bit as good as they say. Possibly, even better. Slabs of moist meat are carved off and piled onto slices of rye bread, topped with a little sweet mustard and served with a plate of pickles.

On this journey, there have been moments when I have just stopped for a second and reminded myself, where I am, what I am doing and why I am doing it. The trip is hurtling along and I want to allow myself time to reflect on the whole point of the exercise.

I did it on The Great Wall of China as I stopped and thought about my mother who had always thought about making the trip. I did it in Mongolia as I stood by the Ger camp and watched nomadic horsemen shoot by at rapid pace and I did it in Finland as The Princessa prepared a meal in which everything served was grown or caught on their land.

It may be odd to say, but I had a similar moment sitting in Katz’s deli. It was not just that the sandwich was good. Of course it was. It was exceptionally good, particularly when each bite was alternated with a chomp on a “half Sour” pickle.

It was just the realisation that I was in one of the great cities on earth, doing what millions of New Yorkers had done before me and experiencing something that could be copied but never matched. It is a unique experience and that is what EAT MY GLOBE was about.

Mind you, I was soon shaken out of my reverie by the sounds of the rapidly filling deli and concentrated on the last few mouthfuls of my breakfast. The only weakness was the bread, which was non descript. I assumed it was just generic white bread, but found out later, from a friend, Sandy, that it is rye bread. The same friend told me that she even mules in her own superior bread and transplants the meat to create a superior sandwich. I laughed out loud when I heard this, but, if you really want to know how seriously New Yorkers take their food, there it is, literally on a plate. 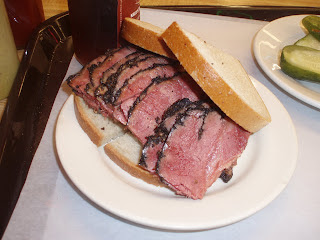 A pastrami sandwich for breakfast is not something to be taken lightly. That much meat early in the morning sits rather heavily on the tum and, as I had two more meals that day, I decided to head off for a bit of a stroll around the Lower East Side of Manhattan.

The weather was lovely, with a slight breeze and I spent the next couple of hours working my way up towards my lunchtime destination with just a few stops to avail myself of the free Wi-Fi that seems to be a common and splendid feature of many of New York’s parks.

By 1pm, I was ready for lunch and found myself outside Sushi Yasuda. There are very few times when the feel an anticipatory shiver of excitement before a meal. The times I have a reservation at this Japanese restaurant makes up much of the list.

New York is responsible for my love of Sushi. Oh, we have sushi in London and it is getting to a stage where I would even describe it as “good” I would never describe it as “epiphanal” which is a word I would use for some of my sushi experiences in NYC.

The first of such came in late 2002, when a friend, Abby accompanied me to a small restaurant called Jewel Bakko. She insisted that we go for the omakase which basically meant we sat there while they plonked stuff in front of us. It was at that point that I first really began to understand how good sushi could be.

My first meal at Yasuda, sitting at his station as he placed piece after stunning piece of uber-fresh fish under my nose, raised the bar again. Even now after a trip to Japan, which included some truly extra-ordinary eating experiences, I was still thrilled to have the chance to go again. 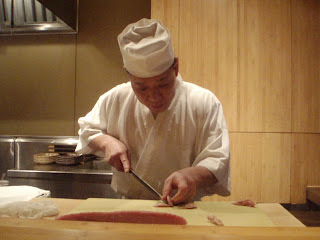 They don’t make it easy, however, with lots of reconfirmations required to make sure my seat was ready for me when I arrived bang on time. It is worth all of that nonsense for the experience itself and, twelve or more pieces of sushi later and about $60 lighter, I still have no cause to knock Yasuda from the very top of my own personal sushi table. It is not just the quality of the fish served nor indeed the technique involved in creating the nigiri and maki. It is the man himself, bustling and humerous, attentive to both his customers and to the task at hand. 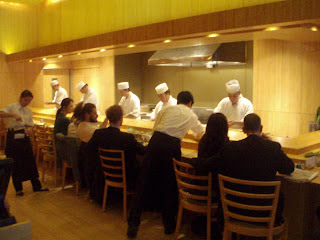 At one point, as he placed my third piece of uni, sea urchin, in front me and said “better than sex”

I looked back at him and said “I don’t know, my memory is not that good”

He bent double with a sudden crack of laughter and then placed another piece down on my place setting, saying ‘better have two”. I love this guy and I love this place. If I lived in NYC or we had an equivalent in London, I would be eating there every week.

Given that I had already eaten two meals and had one more to go, I decided to walk down from Yasuda’s to Tribeca where I was going to meet one of my dearest friends, Cathy Loup.

Cathy (pictured here with a large piece of pork, which is another story all together) may not be a native New Yorker, but she represents everything that is best in the inhabitants of the city. She is fiercely proud of it and living there. But, unlike so many of its residents, not blind to its faults and the fact that there may just be other places on earth worthy of consideration.

She also has one of the best hearts of any person who has ever walked the globe. It would take a lot hard investigation to find any person who could come up with a bad word to be said about her and, even then, the most damning thing they would be able to say is that she has a fondness for cheese from Wisconsin.

When my mother died, it was Cathy whose regular mails to me as I sat in Washington Airport waiting to fly home from a business trip, kept me going. When I came to New York on my many business trips, it was her kitchen to which we decamped to produce Bengali dinners or unfeasibly large chunks of roasted meat and, when I look to have someone to break bread with, she is one of the first on the list.

So, inevitably, on this leg of the journey, she was the first person I was going to dine with and left it to her to choose a place. 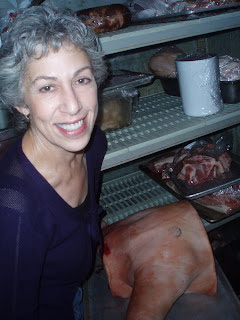 She chose The Kabab Café in Astoria, Queens. Never heard of it? I am not surprised. Unless you are a reader of any one of the food boards, there is no reason why you would have come across this tiny, unassuming place run by the irrepressible Ali. I only got to know it when another friend, Nina, took me there with promises of offal in all its many and varied forms. 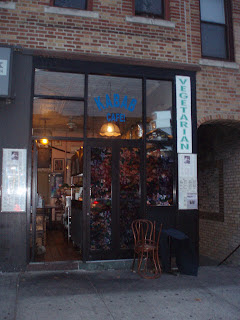 She was not wrong. From a kitchen the size of a small shower cubicle, Ali produced plate after plate of food taken from bits of the animal that would normally be let on the abattoir floor. The flavours were revelatory and the atmosphere fuelled by good wine made the evening one of the best I have ever spent in the city. 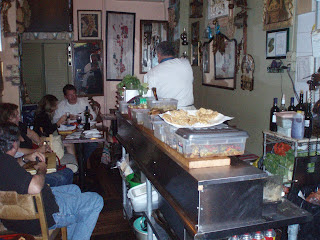 I had not been back for three years. A shame, but I was determined to make up for it. So, after collecting Cathy from work we headed over their by subway and wandered in to find Ali little changed and hard at work over the stove.

“come here Indian boy” he shouted recognising me even though he had not seen me in too long a time.

“have some of this” he added thrusting a battered something into my hand.

I bit down and a crunch gave way to a creamy inside.

“brains, my boy” he beamed. “gotta have brains” 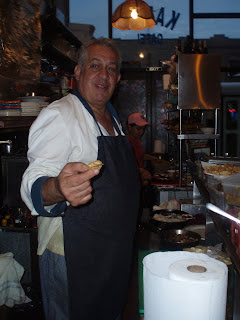 I was back at The Kabab Café. Thank God. 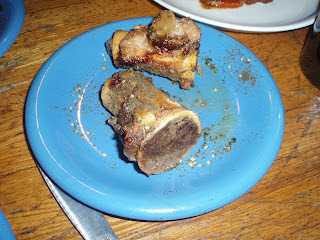 It was as good as I remember. Course followed course as we devoured every bit of any number of animals. From glands to gonads, from brains to marrow bones. It is, by its nature, a bit one note “stuff in sauce” Cathy said hitting the nail on the head. But, I don’t care. If it is one note, it is a hell of a note to have. 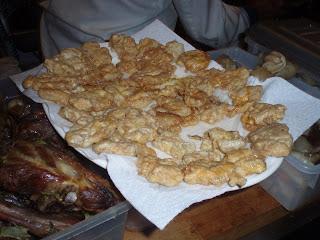 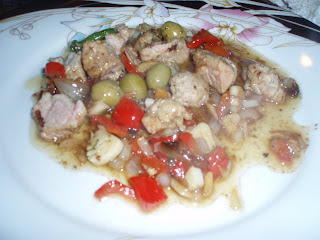 At the end of the meal and two bottles of wine later, Ali, offered us slices of honey cake to finish our meal off, washed down with some mint tea. A perfect ending. 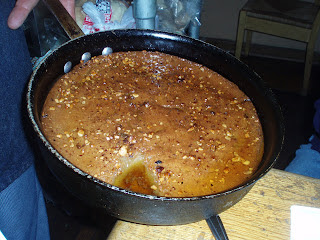 We bundled out into the cold night air warmed by a last farewell hug from the man mountain himself and smiled our way back into the city.

Another great day in a great city and a chance to catch up with some old friends. Yasuda, Ali & Cathy
Posted by Hermano 2 at 9:40 AM

I've just cottoned on to your second blog. Have always enjoyed the London food blog, but this is so much more personal. I'm enjoying it.

Indeed, as someone from India who grew up in Canada, lived in Boston, lived and fell in love with NY, and currently living astride the Atlantic between London and Boston and NY, I have many warm, strong, and mixed feelings about NY. But indeed after all these years, it is that feeling of comfort that comes across immediately and powerfully when I'm back. I'm back, I say, and feel good about it, feel good to see the streets, the garbage, the traffic. Wonderful, all of it.

You visited two of my favorite people in the food world. It's hard to beat Yasuda and Ali. Or their food.

I don't have any pals other than the pastrami, hot dogs, and salami at Katz's, but friends they are.

Wow, Cathy is so beautiful. I've seen other pictures, but none have matched that. You are so blessed to have her as a friend. She's luminous...especially for a Cheesehead.